Here I continue reflecting on the day I competed in the Sky Arts Portrait Artist of the Year 2018. The sitters were in position and it was time to paint.

Once Meera was in position and before the official start time began I was confronted with a variety of problems. It was almost as if I was given too much to work with and overwhelmed with what to include: The face, drapes, the blue, the pashmina, the earring. I had to gain some clarity and bring some order to the proceedings. As soon as time began I reached for my camera. In addition to painting I am a keen and passionate photographer and I’ve had previous experience with photographic portraiture.

I took several source photos of Meera with different compositions and facial expressions. She was looking to her right (our left) so I experimented with asymmetric compositions settling Meera’s face to the right of the image. She had this wonderful pose with her hands and I spent a good 5 minutes internally debating whether to include them or not.

My self-portrait featured a lot of textured clothing and hands play a big part in its narrative and I love the challenge and satisfaction of painting hands. I described later to Tai, one of the judges, that I felt tortured about making this decision however given the time constraints I probably wouldn’t have been able to do them justice. I settled on a composition featuring Meera’s face and upper body. 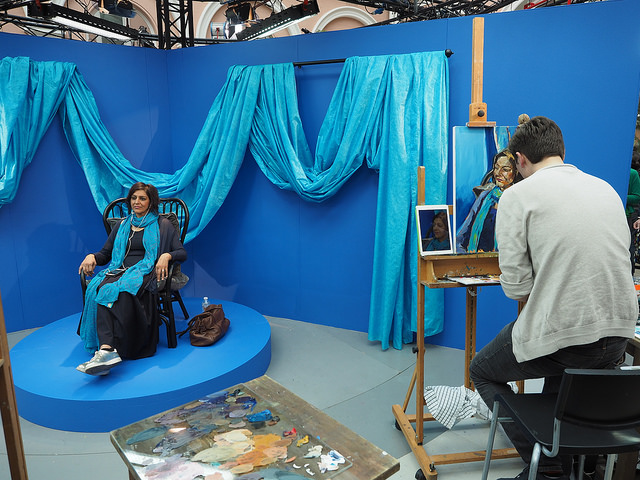 Game on. 4 hours is really not a lot of time…

Once I was happy with the composition I mainly worked with the Ipad to translate image onto canvas with a pencil sketch. In preparing for the show I had always found it difficult to achieve a reasonable likeness with the rough sketch. This exercise was purely to insure that proportions were respected and that I had a “map” to work with when I apply paint to canvas. In the past I’ve put paint onto canvas immediately however I’ve often had time in case mistakes were made to let the paint dry and then paint on top of it. Here I wouldn’t have that luxury as I would soon discover that time absolutely flies by.

During this time the judges Kathleen and Kate came and had a chat with me and I was pretty frank about my lack of likeness at this stage. We also discussed my day job which consisted of surgery and the skills and differences that are translatable. I had thought about this on the journey down about what similarities and differences are there between orthopaedic surgery and painting and came up with a few ideas:

“Once our conversation was over our first hour was up. I had reached a mild state of panic at this stage”

Once our conversation was over our first hour was up. I had reached a mild state of panic at this stage because often I would want to have the sketch and my colour wash done within the first hour so I felt I was on the back foot at this stage. 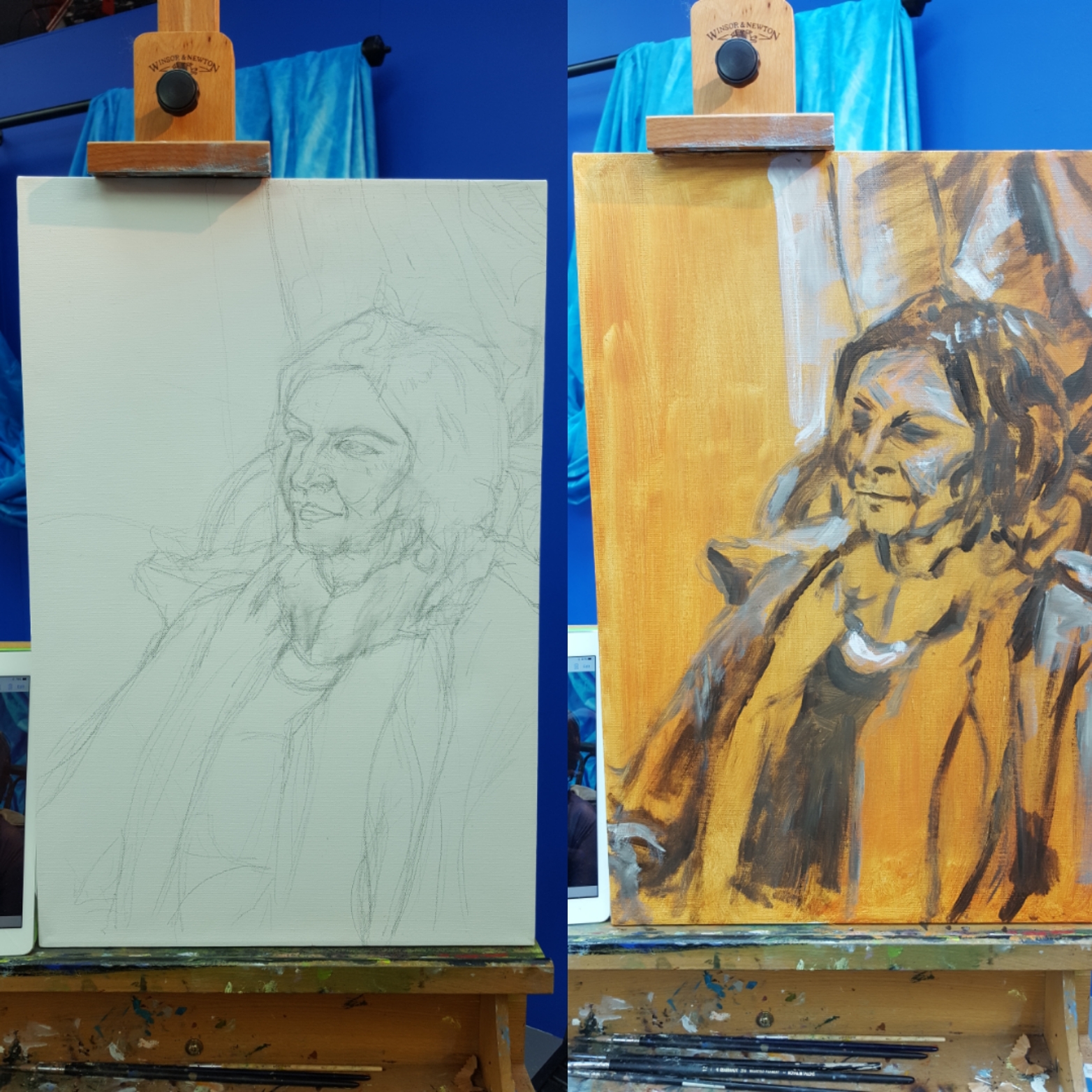 By the end of the first hour I only had the sketch done which I had hoped to do within the first 30 minutes. The second hour became a frantic painting frenxy to get the underpainting down and the first layer of oil. I had to allow enough time for the acrylic underpainting to dry, have a lovely chat with Frank and start the actual painting. My inner timeline was slowly starting to crumble.

Once the break was over it was back to the canvas. I had said to the assistant directors that at the start of this block I would want to slap on a large orange underpainting and thankfully the camera men came over to film this. I applied a thin acrylic orange layer (the reason I chose orange was because it was complimentary to blue and would warm up the flesh tones and blue from deep in the painting) with a large brush borrowed from my housemate (thanks Pete!). I then applied the dark tones in burnt umber (again acrylic) and allowed that layer to dry. I usually use oils for the underpainting but again, due to time constraints I didn’t trust it would dry in time.

I entered what can then only be described as a painting frenzy. Very conscious I was behind, as soon as the underpainting was dry I slapped on the main blues in the background and Meera’s clothing. At this point I had a chat with Frank where I had joked that I had reached the second hour and still hadn’t started properly painting the face and he said “Well from my experience doing this show for several years the face is quite important”. 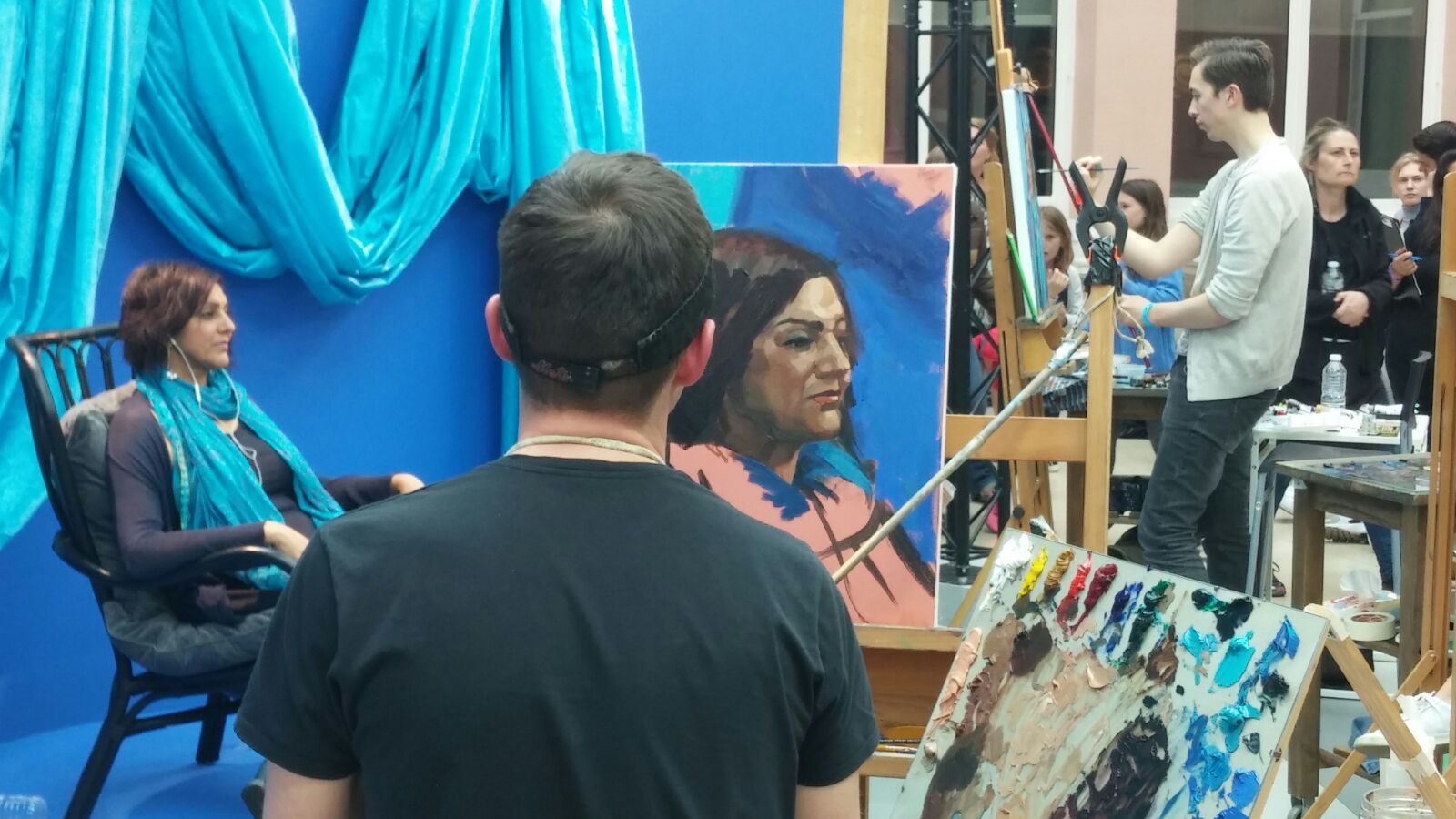 Jonathan and I in the background with Meera Syal.

Lunch was an excellent time to chat to the other artists and catch up on how everyone was feeling. The general consensus was that we all had no idea how much time the interviews would take and everyone felt behind. Because of nerves I had missed breakfast but by lunch time I was absolutely ravenous and devoured the food that was kindly supplied to us. It was nice to chat to the artists albeit briefly because most of them, myself included wanted to get right back and continue painting even in the absence of a sitter who was on a break. I had finished my food and took the opportunity to soak up the atmosphere and look at the self-portraits done by the other artists and I was blown away by the talent. I also had a sneak peak at the progress of the others and again was in awe.

By the time hour three started I had started painting the face. For me painting the face is thrilling but immensely scary. One small brushstroke can change everything and as I tried to find Meera in the browns and blues in my palette I had started to panic and I knew by the end of hour three the likeness still wasn’t satisfactory. When the fourth and final break came along I was entering panic mode. I frantically called my Dad who was on his way and sent an image of the current painting to everyone I could think of who could scrutinise it and give me pointers (Dad: “Don’t forget to paint the earring Alastair!”). I even started asking passers-by what was wrong but I’m not sure they were allowed to talk to me! Aside from trying to take regular steps back from the canvas I am reliant on the eyes of others who could pick up irregularities that my brain may have grown accustomed to. Thankfully my Dad and my good friend Sam arrived and we had a chat between ourselves on what needed amending and once I had done that I made the corrections and was a lot happier in my mind with the likeness.

The final hour was the home straight and after reaching a point where I felt happy with the likeness I worked on developing tones in the clothing and background that I had neglected since hour 2. When the bell finally rang that time was up I felt physically and emotionally exhausted and a sense of numbness and relief that I can’t really explain fully.

Continue reading for Part 3 – The Reveal