Ever since I went on Portrait Artist of the Year and met some wonderful artists on that show, I made it my mission to travel to Florence in order to learn the techniques of the old masters. I came into this process unsure of what to expect. The last time I received any formal art education was in secondary school so I was apprehensive about what to expect and what was expected of me.

Prior to attending the course we were sent a list of materials which read like a list of equipment for Hogwarts a la Harry Potter with Hog’s hair brushes, walnut oil, unrefined turpentine and odourless mineral spirits casting a magical air prior to the course beginning. This was very exciting and thankfully we were able to source all our material locally at the Florentine art shop Zecchi.

On the Sunday before our first official day we all met at the Academy. My initial impression was amazement. There were scores of classrooms set up for figure painting and study with easels positioned around where a model would stand. There was an anatomy classroom which particularly interested me with many cast sculptures lining the walls. Our teaching would take place in two rooms nearer one end of the academy with two classrooms devoted to portraiture and one for the figure study. One other advantage was that these classrooms were located closest to the café for essential cappuccino and croissant breaks.

When we assembled and introduced ourselves it was clear that we all had such a diverse range of backgrounds, interests, artistic styles and jobs which put me at ease. I was concerned that I’d be the only one who worked alongside art but it was very pleasing to see among my classmates a nurse, a mathematician, two concept artists for Game of Thrones (this excited me greatly), a mosaic business owner, and a botany illustrator among others. Furthermore each of us had varying degrees of experience of using the “sight size” method. For me, I had zero experience but others had a background knowledge of the concept having seen it used by other artists on portrait artist of the year.

My personal goals for the week were fairly broad but I wanted to learn how to mix colours for flesh tones accurately, how to organise my palette and also how to paint a portrait in the style of the old masters. A disadvantage painting alone is that I don’t receive any feedback on my paintings whilst I’m painting them and I wanted to soak up as much knowledge as possible, both for my own artistic development but also to develop a sense of rigour and discipline to my work. Certainly, rigour and discipline is what I would receive.

My usual painting method involves perhaps placing a few colours randomly on the palette, mixing them randomly without any great thought on which brush to use when and painting in short bursts of time – often maybe 1 or 2 hours at a time. This would not be the case on this course. 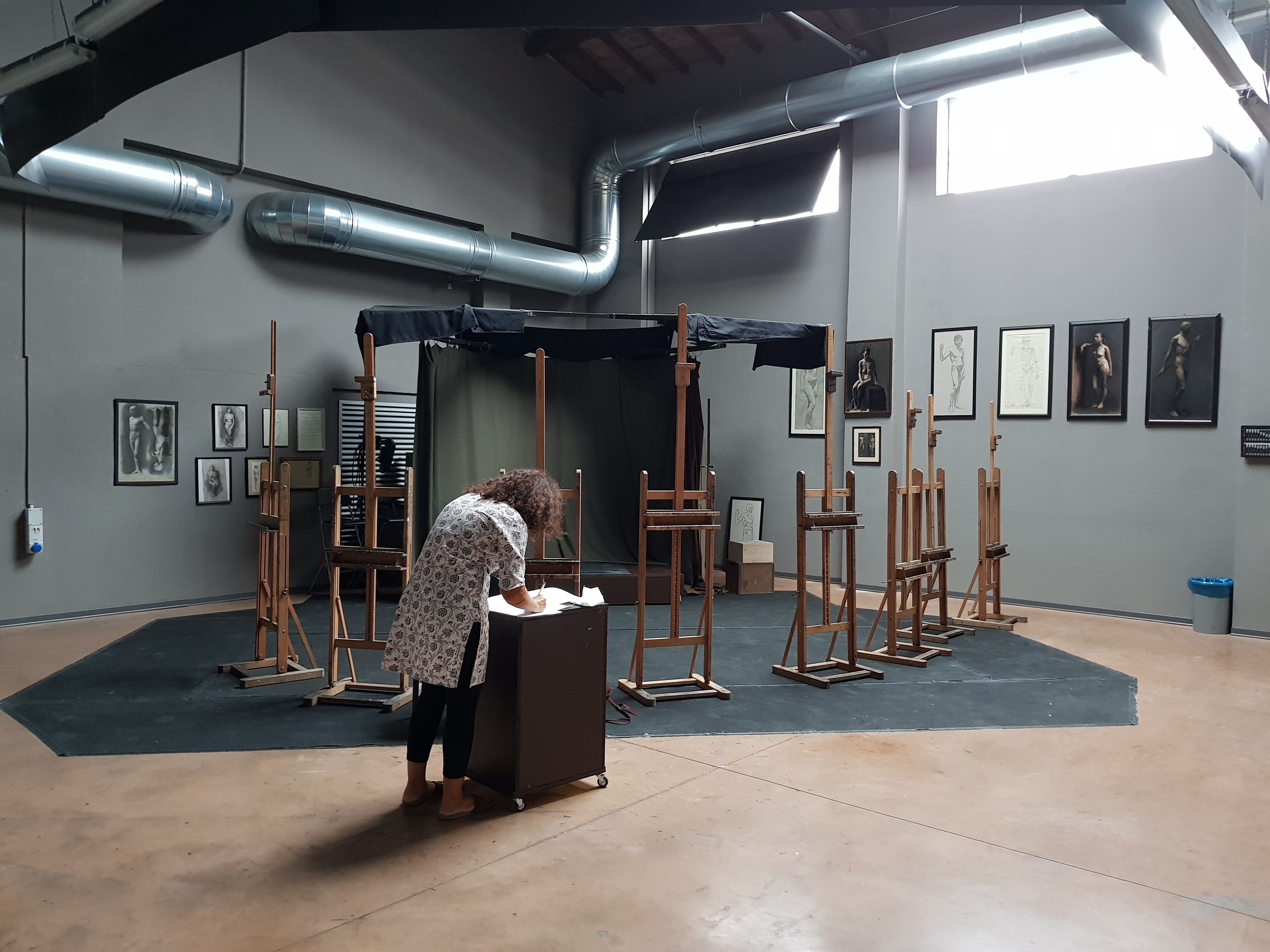 The figure study teaching room, The Florence Academy of Art

On our first day we were put into pairs of individuals with similar heights and I was partnered with Eddy. Getting things set up correctly is a lesson I have learnt from surgery and is applied very well in this situation. The easel position of the canvas relative to the model and my standing position all had to be marked and taped as this would determine the rest of the week. Additionally the models would also have to have taped marked on the floor as to where they were positioned. Our easels were positioned with the canvas vertical against the model roughly allowing the model’s ear to sit in the middle of the canvas. Our point of observation would be roughly 3 metres away – this was brand new information for me because in the past I’d observe from where my canvas was. Furthermore we would only be observing from one eye. The aim was to create an accurate representation of the model measuring all the proportions, tonal values and shapes entirely from life. This would involve many steps walking to and from the canvas.

The sight size method involved visualising the subject and canvas with one eye and translating what you saw directly onto canvas. By placing a mark on the spot where you stand, this optimised your view and kept the model in the same line of sight and distance in order for one to work on the painting for several hours. Natural lighting was used and the rooms were designed to allow the light to highlight the model as uniformly as possible throughout the painting process.

“I wanted to soak up as much knowledge as possible, both for my own artistic development but also to develop a sense of rigour and discipline to my work.”
The process

The process used for both paintings was the same and employed starting off with a tonal sketch. A rough sketch of the subject with dark, mid-tones and highlights were employed as a “map” to give you an understanding as to where the main tones lay. The sketch also allowed you to map your composition on the canvas before starting. Following these we covered the white canvas in a light raw umber colour and then started the translate the main outline and shapes from the model to canvas. Once this occurred we then painted the main dark tonal values in raw umber, then added highlights before spending a considerable portion of the latter days mixing flesh tones of varying values and then painting. 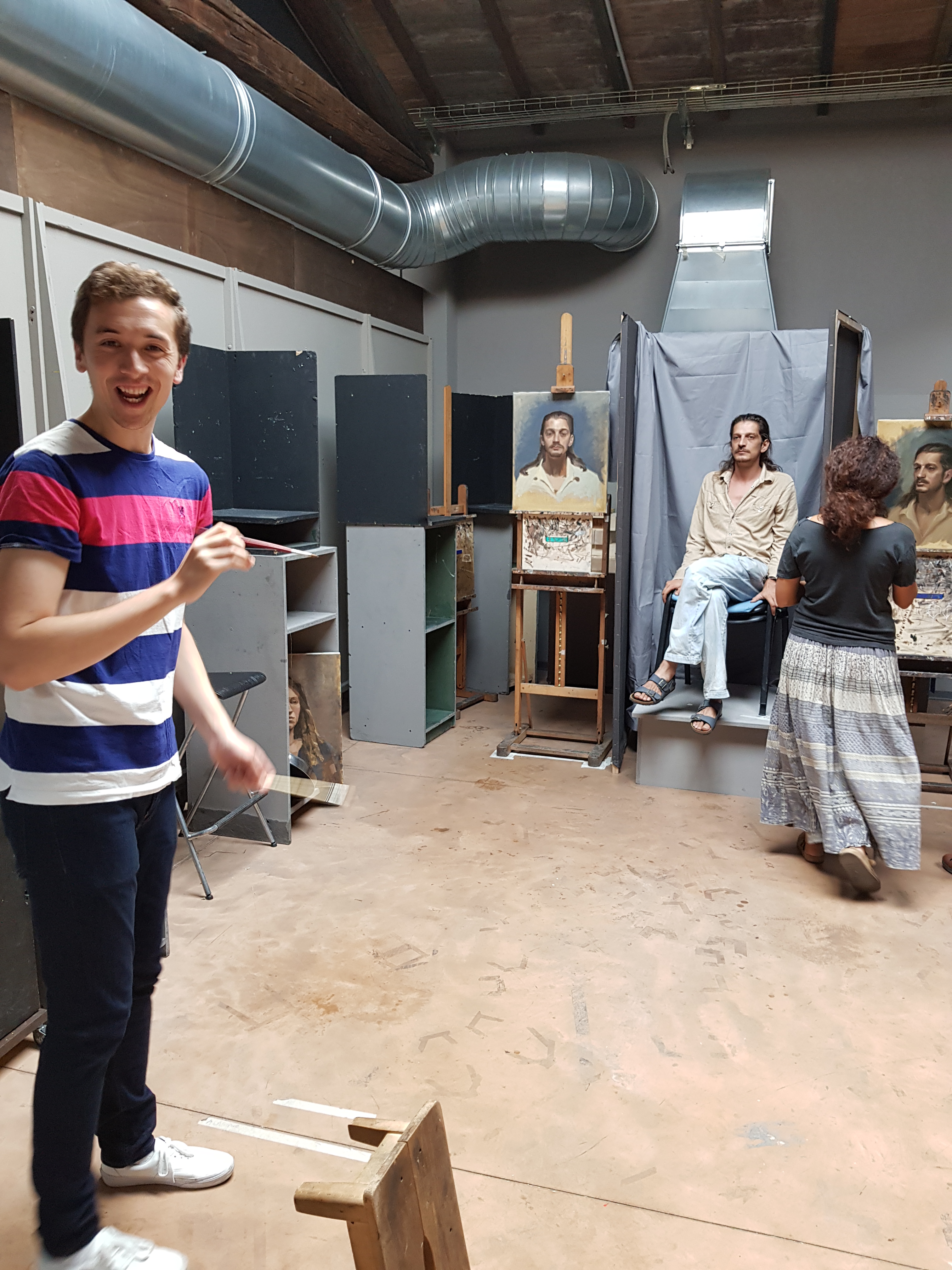 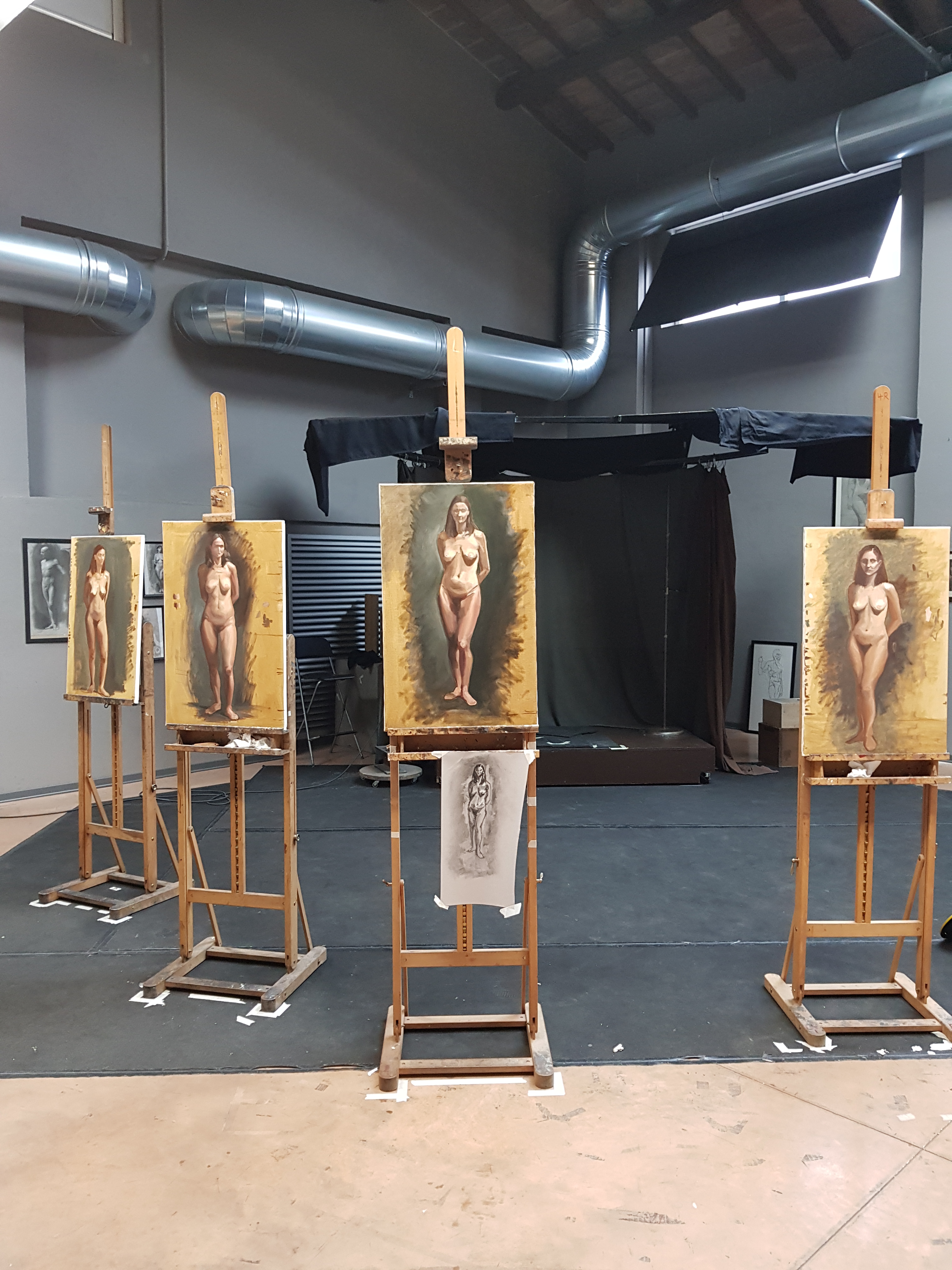 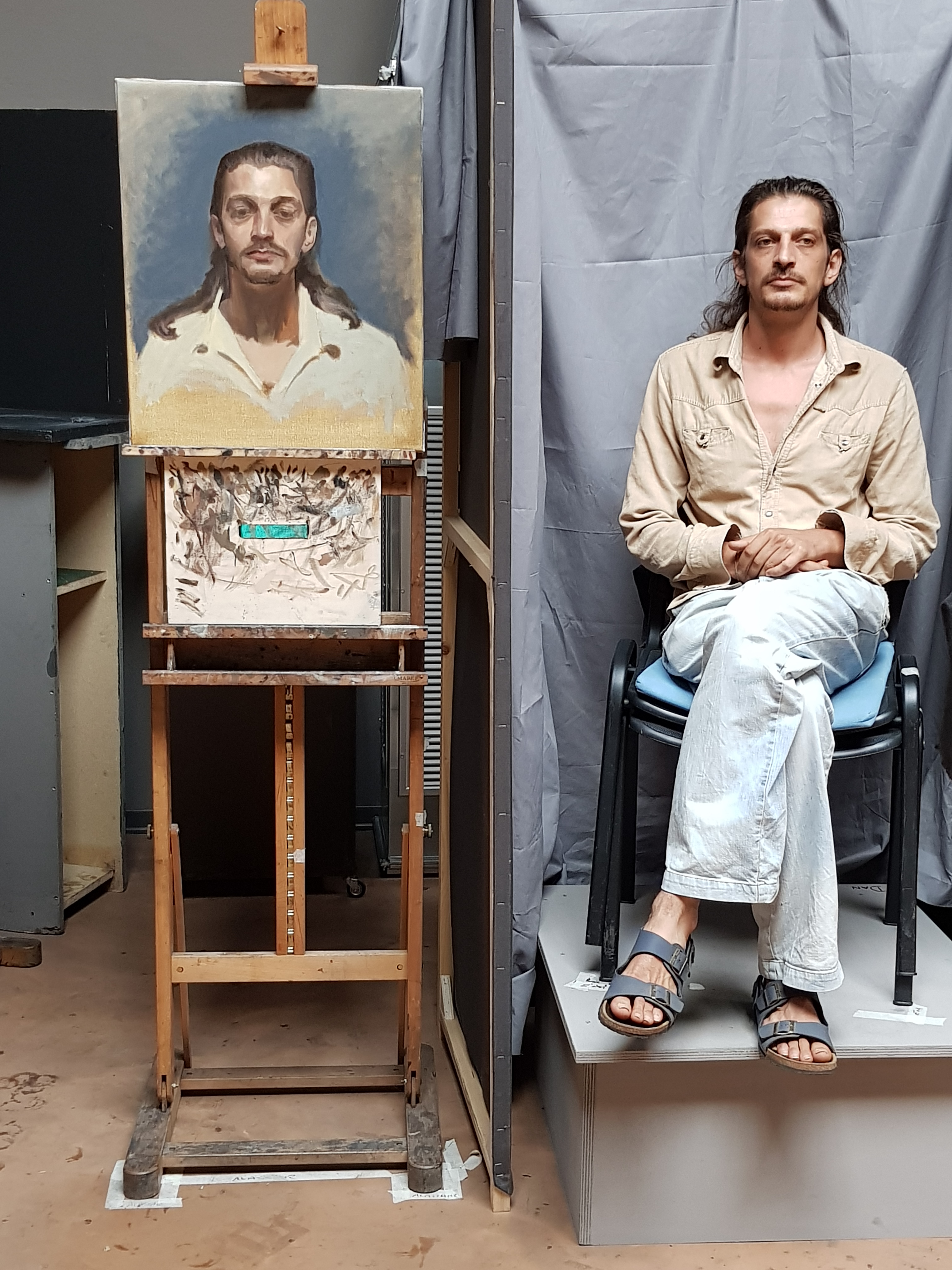 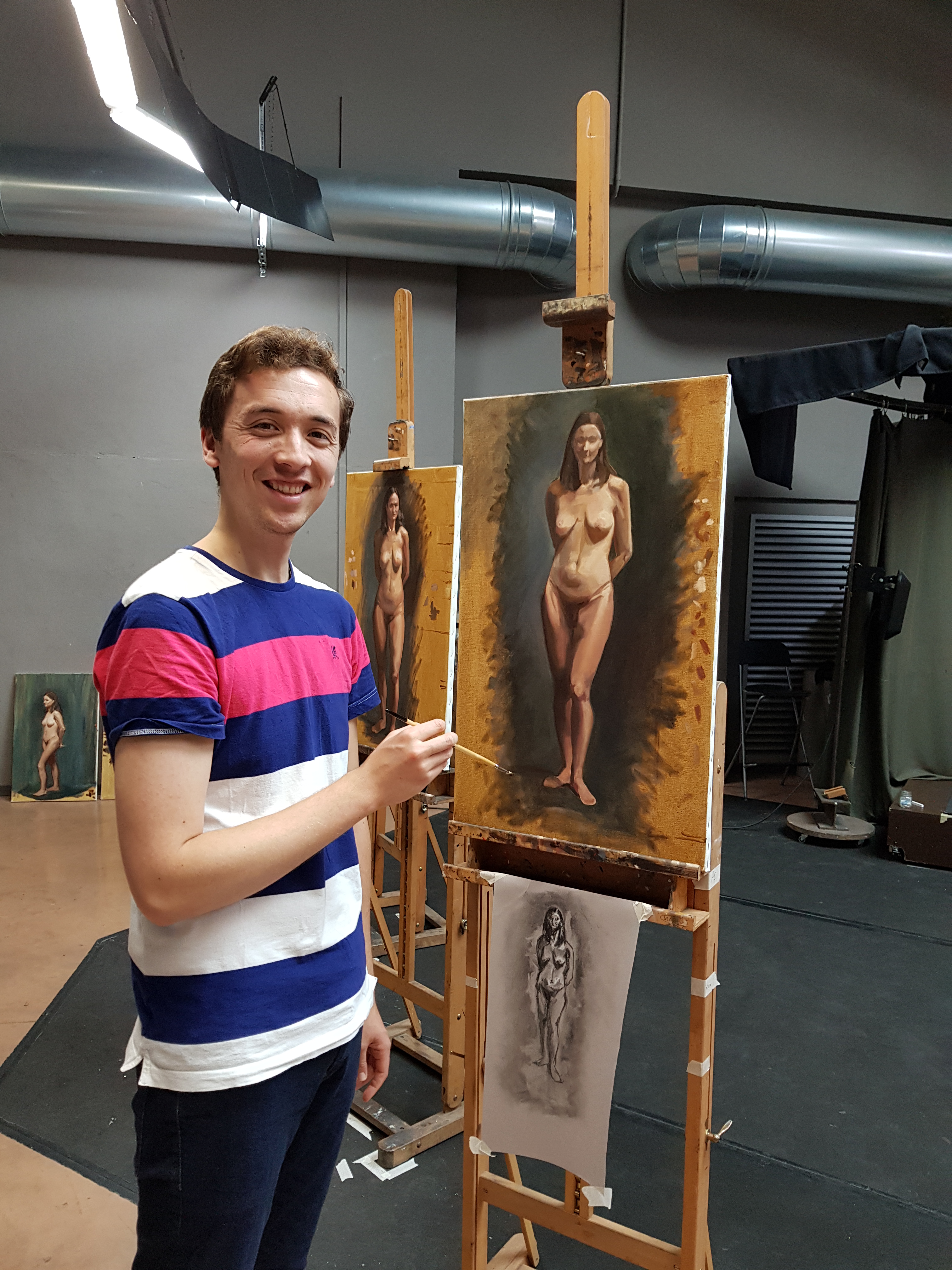 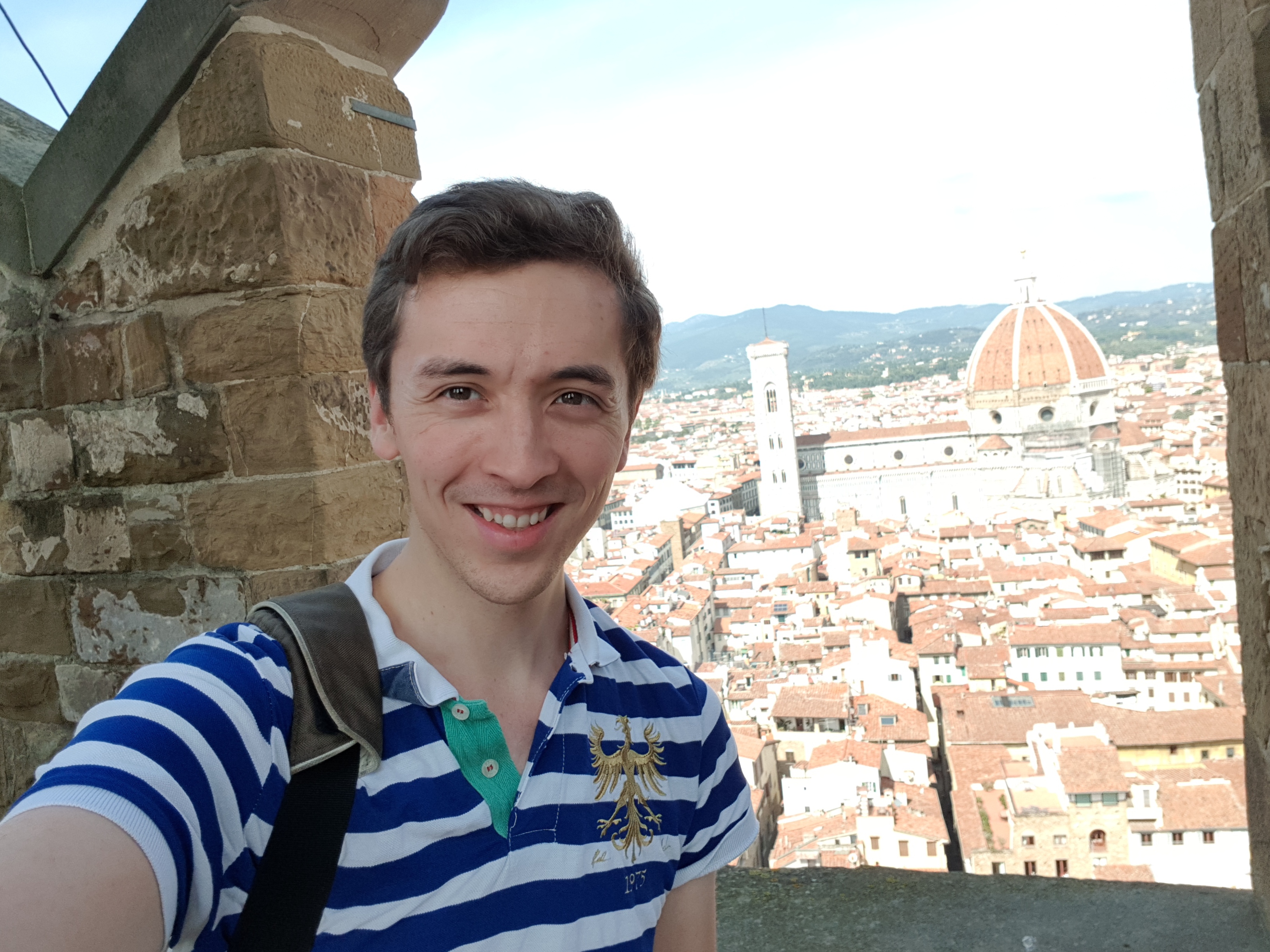 The amount of mental energy required for this week long course was considerable. I suspect when students master this process after 3 years of assiduous study it becomes easier however for me, painting for 6-7 hours a day was mentally draining. The process involved constant scrutiny of the subject and constant surveillance of the tonal values in order to create a painting as accurate to life as possible.

It is easy for the eyes to fatigue during this process so in order to keep things fresh we employed a mirror that allowed me to view the subject upside down in order to gain a fresh perspective.

Needless to say it was an excellent week and I feel I have learnt so much. I’m keen to keep developing this skill and it’ll be interesting to see how this course informs my future work .

Until then Grazie mille Firenze!