Trauma – the story of a painting that defined my 2020 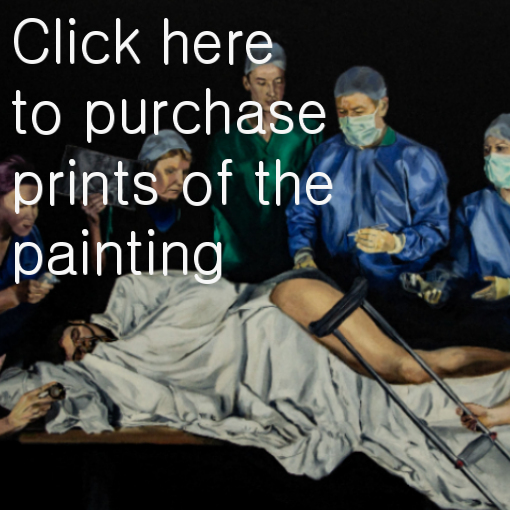 On the 23rd March 2020, the UK entered a nationwide lockdown and for many, life changed significantly. Here, I recall my experiences on the front line as a trauma and orthopaedic surgeon and artist, and  how a work of art would take on a special significance.

Background to the painting

For the last 6 years I have been training to be a trauma and orthopaedic surgeon. The training programme for this specialty is long however you get to work in a team with some amazing people. Every morning the entire trauma team meet to discuss all the new patients who have been admitted to hospital known as the “trauma meeting”.

I had conceived the idea of a painting a number of years ago that showcased the different team members in our department involved in delivering patient care. These members include surgeons, anaesthetists, doctors, nurses, operating theatre staff, radiographers, and allied healthcare professionals.

In early 2020 I had made the decision that I would create this painting this year. At this time the spectre of COVID was still a problem for countries far away. Who knew in a short period of time how things would change? 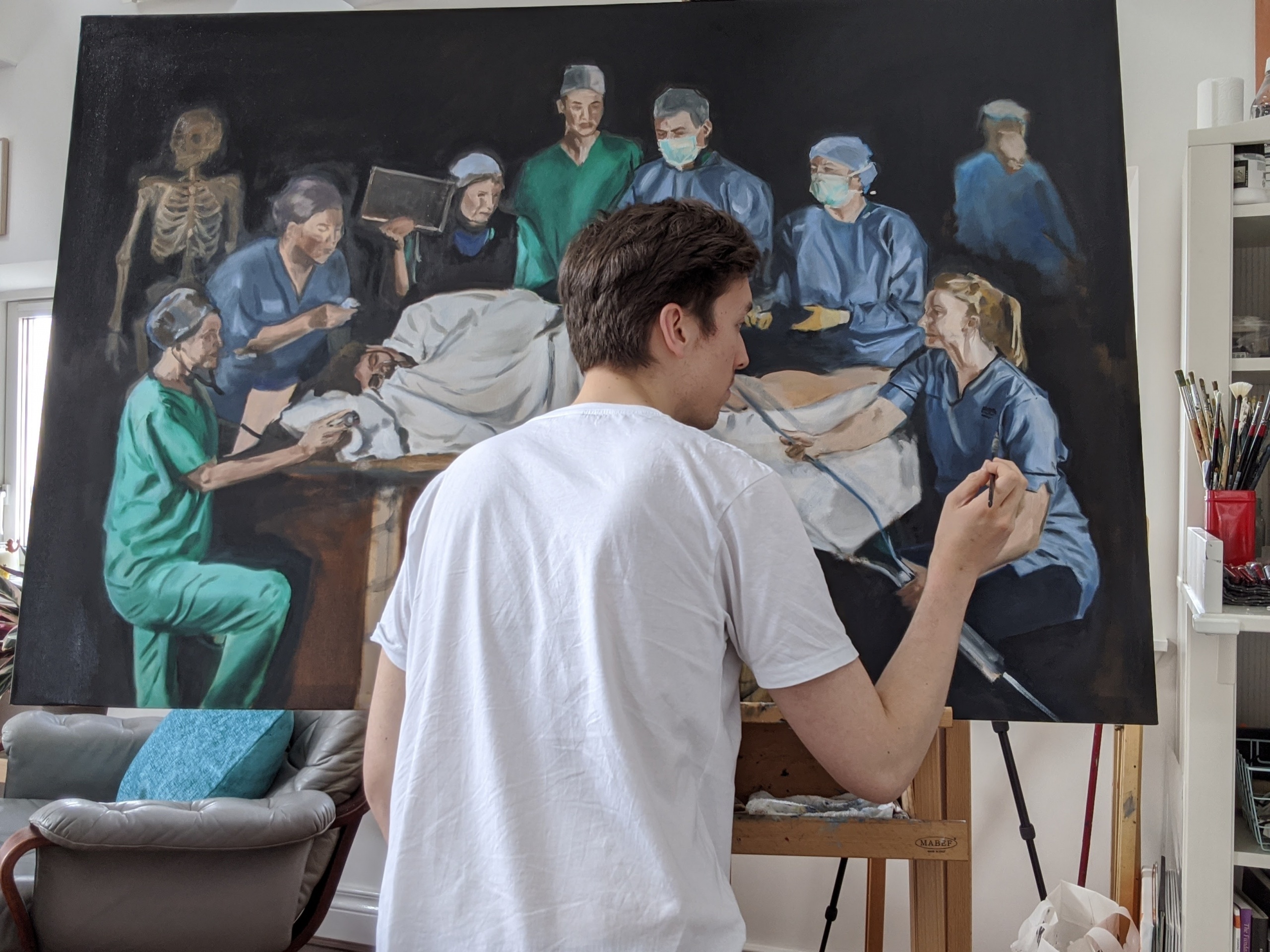 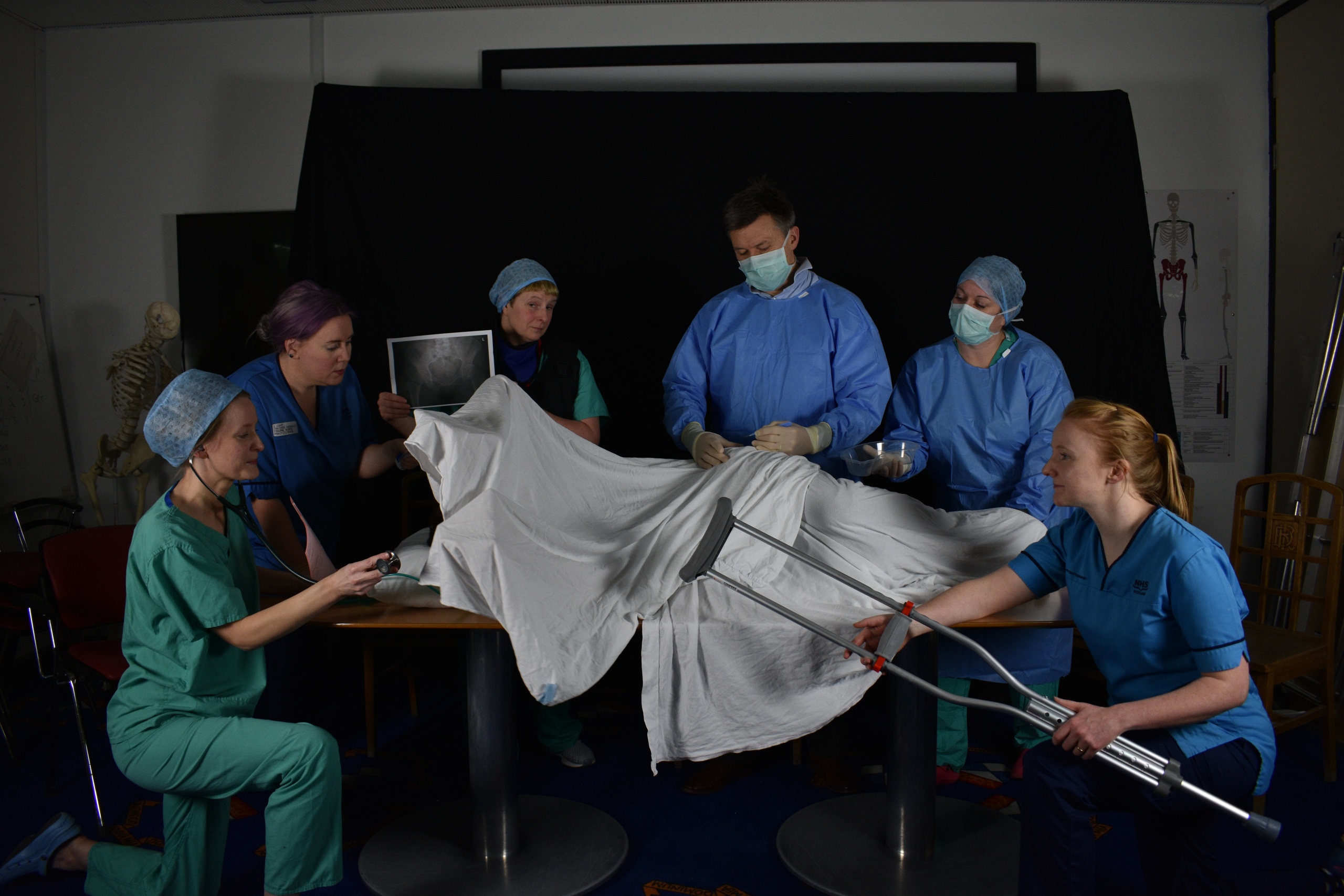 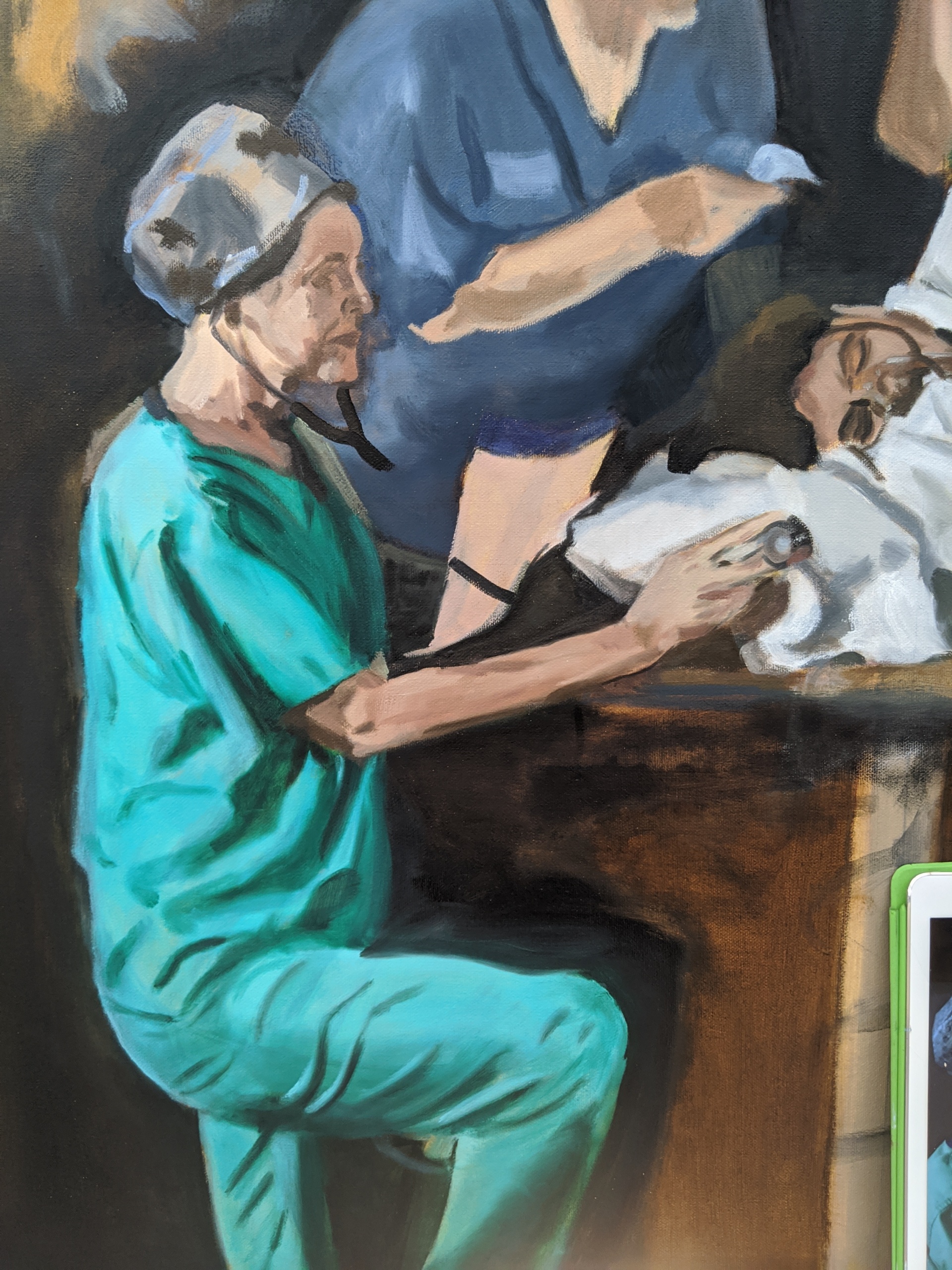 Settling on the composition

I had sketched a number of ideas initially with varying numbers of subjects however ultimately the size of the canvas determined the number of individuals involved. The largest canvas I could easily acquire (and fit in my small car!) was 100 x 150cm which is the size of a relatively large notice board. In my head, I could realistically fit between 8-10 subjects on this canvas.

I approached various members within the department if they would agree to model for me and despite some slightly nervous responses, they were up for it. I approached colleagues who had historically supported my work in the past and would fit within the painting itself and I invited them to a photoshoot. I managed to get my subjects together many weeks before any COVID-19 restrictions were implemented and looking back, I was so thankful we were able to do this.

The photoshoot itself was very good fun and I was very pleased that the sitters were receptive to my direction and really went for it. I took inspiration from a number of different sources particularly art of the Renaissance from painters such as Da Vinci and Caravaggio as well as historical paintings depicting healthcare workers for example Rembrandt’s Anatomy Lesson of Dr. Nicolaes Tulp. I wanted to paint something in that style however juxtaposed with modern subjects, clothing and context. These ideas informed the overall composition of the painting and placement of all the team members. After experimenting with a number of different poses and combinations, I settled on the final composition that I would use as a reference for my painting.

The process of painting

I predominantly worked from a photo that I printed on A3 photo paper. The canvas was significantly larger and translating this required a methodical process. I mapped out my drawing in coloured pencil first in order to position the subjects and insure that they were placed in the correct position in a similar manner to a draughtsman on a canvas, I primed with a thin layer of raw umber paint. I then slowly built up the painting in layers, building on each layer and making corrections as I went in terms of colour, tone and proportion. I personally enjoy painting faces, hands and clothing and as this scene had these in abundance I found the process immensely enjoyable.

Training to be a surgeon is still very much an apprentice-style model and I painted myself deliberately next to the Consultant Surgeon observing and learning in order to capture this relationship. I painted myself last so that I could focus on all the other subjects first.

As this portrait was painted in a time of COVID-19 this was represented by the masked figure in PPE on the right of the canvas, and the skeleton represents our specialty and death. The patient is about to have an operation on their hip and Ms. Fulton the radiographer is holding an X-Ray demonstrating a broken hip. I felt my vision was realised in a painting that celebrates this team despite the ongoing external challenges. 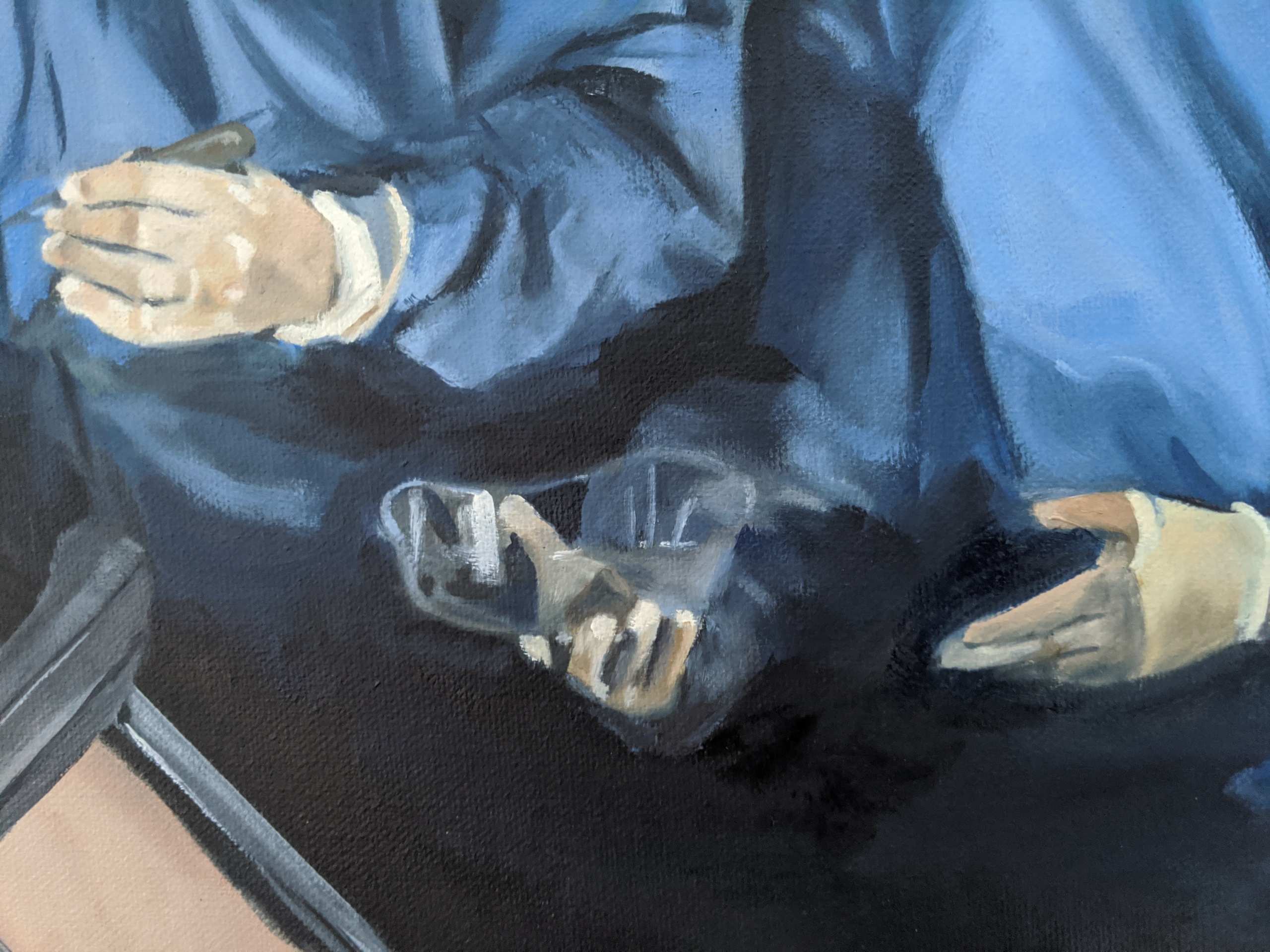 “Hands tell the story as much as the faces, gestures and expressions of the sitters.” 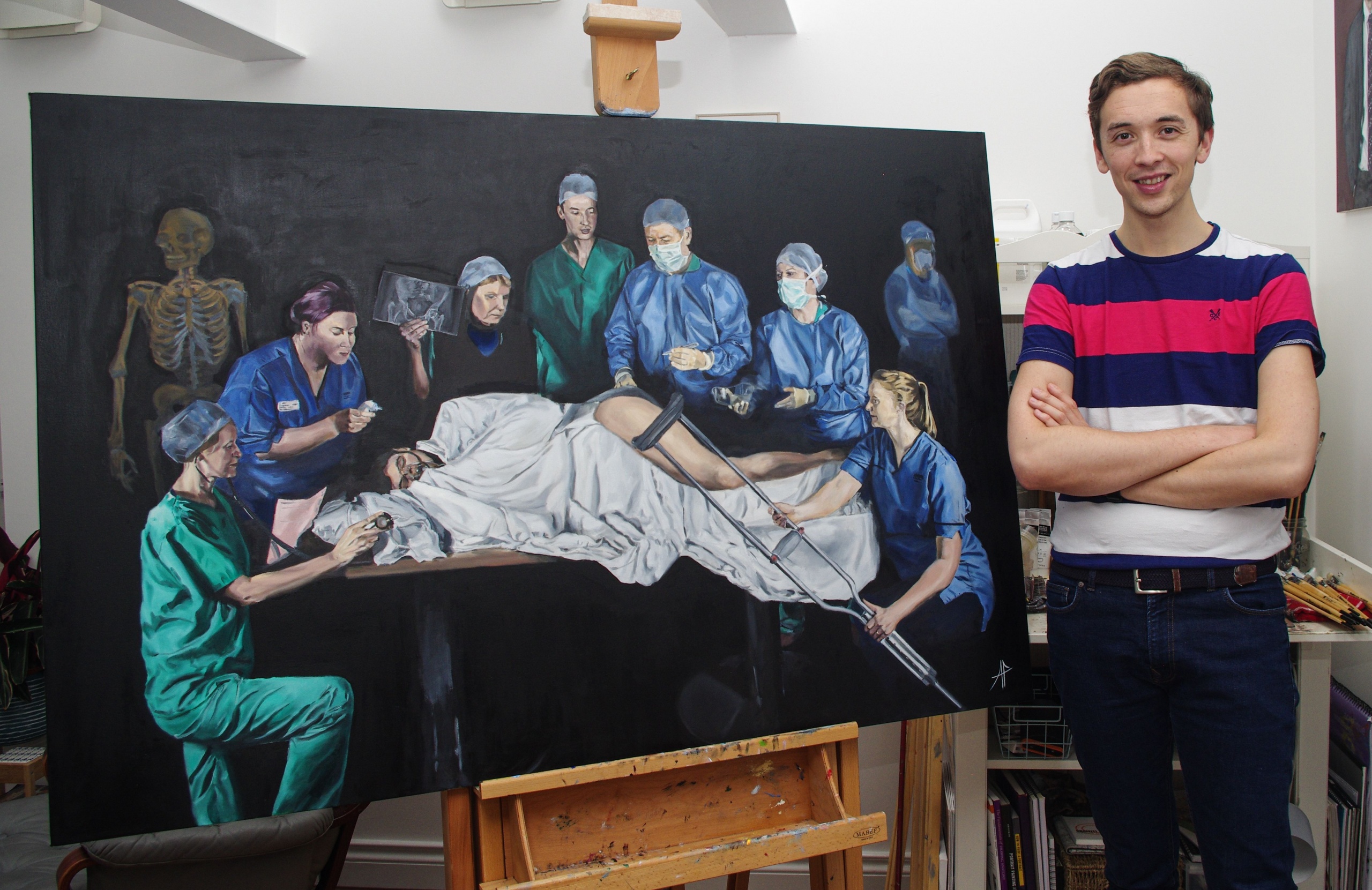 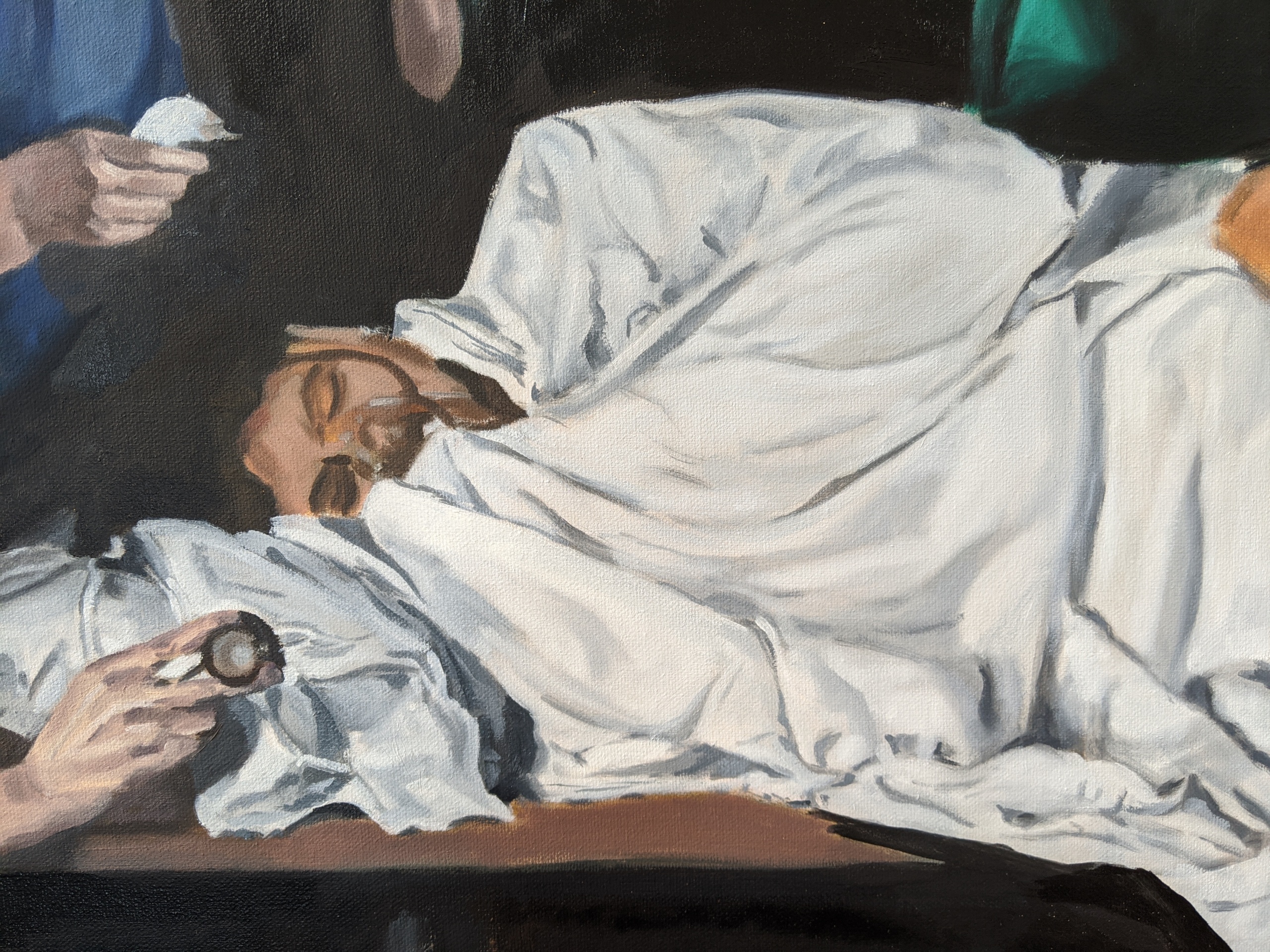 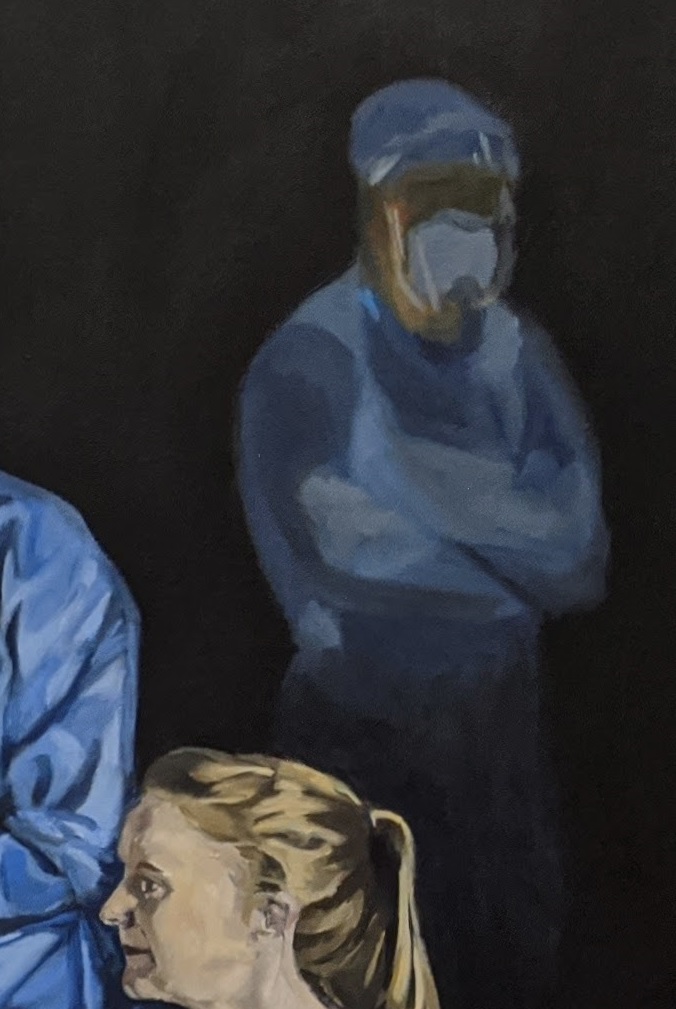 The COVID-19 pandemic and Portraits for NHS Heroes

As the pandemic began and lockdown ensued, the painting took on a special significance. Like many others, I was separated from my partner, family and close friends during lockdown only being able to see my colleagues at work. I started to consider the painting a record of the times we were living in and I included two additional subjects: the skeleton and the figure in personal protective equipment (PPE). 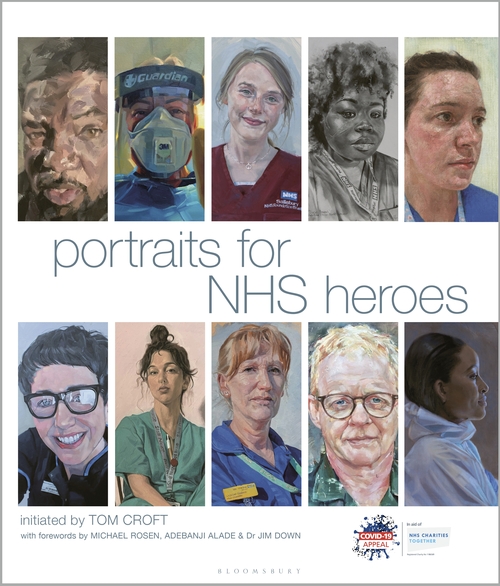 “The completed painting “Trauma” will feature in the Portrait for NHS Heroes book available from Bloomsbury here. All royalties from the sale of the book will be donated to NHS Charities Together.

I felt this painting represented everything good about the NHS I work in and I wanted to be a part of that wider movement. This painting felt like a perfect fit that celebrated the huge influence both art and the NHS have had on my life. Working on this painting throughout this pandemic took on a new urgency and meaning. It really helped me mentally during lockdown and kept me focused.

Having something like this to work on gave me focus and a sense that I wasn’t alone. 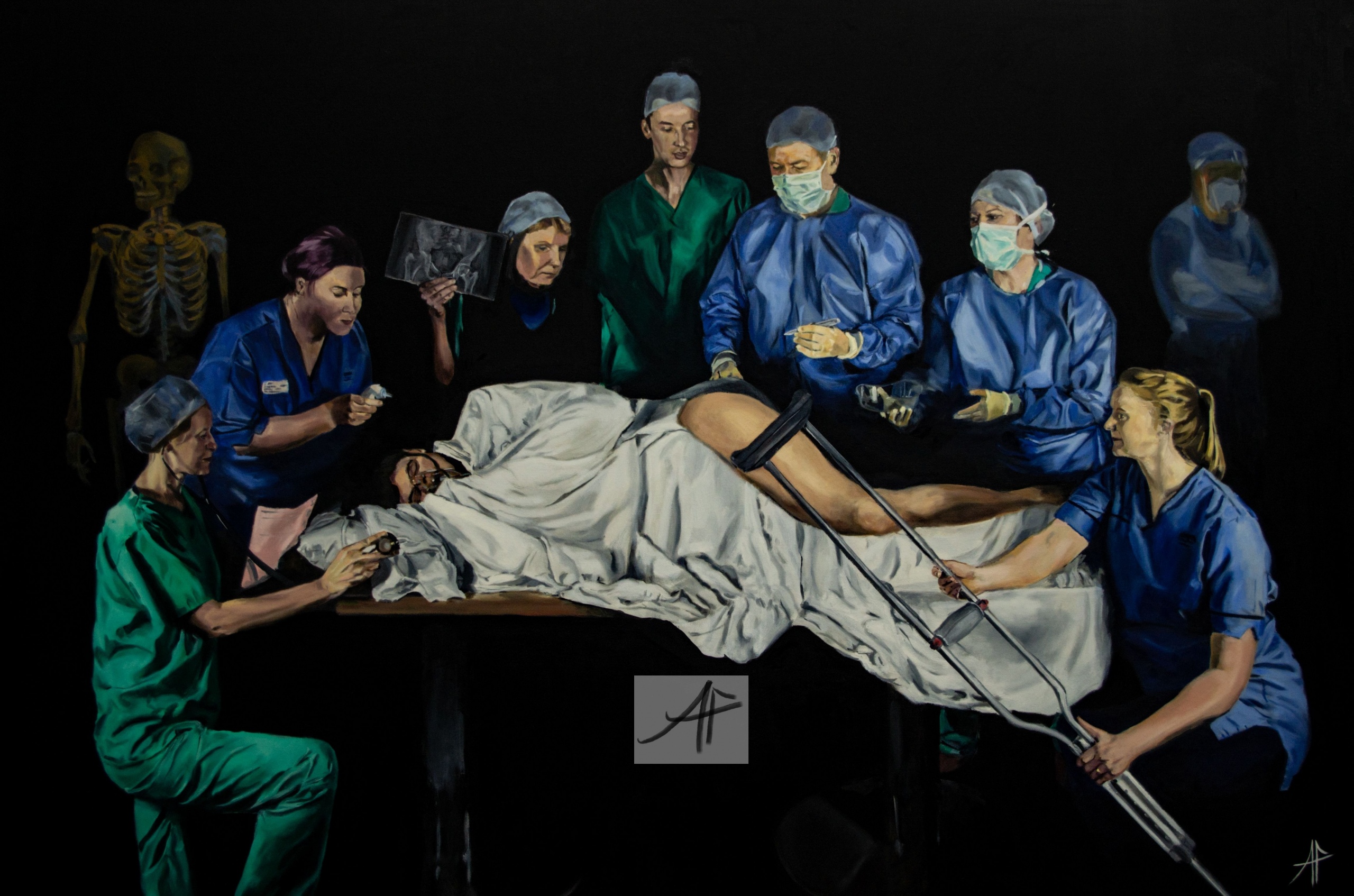 “Trauma” as featured in the Guardian Weekend on 7th November 2020 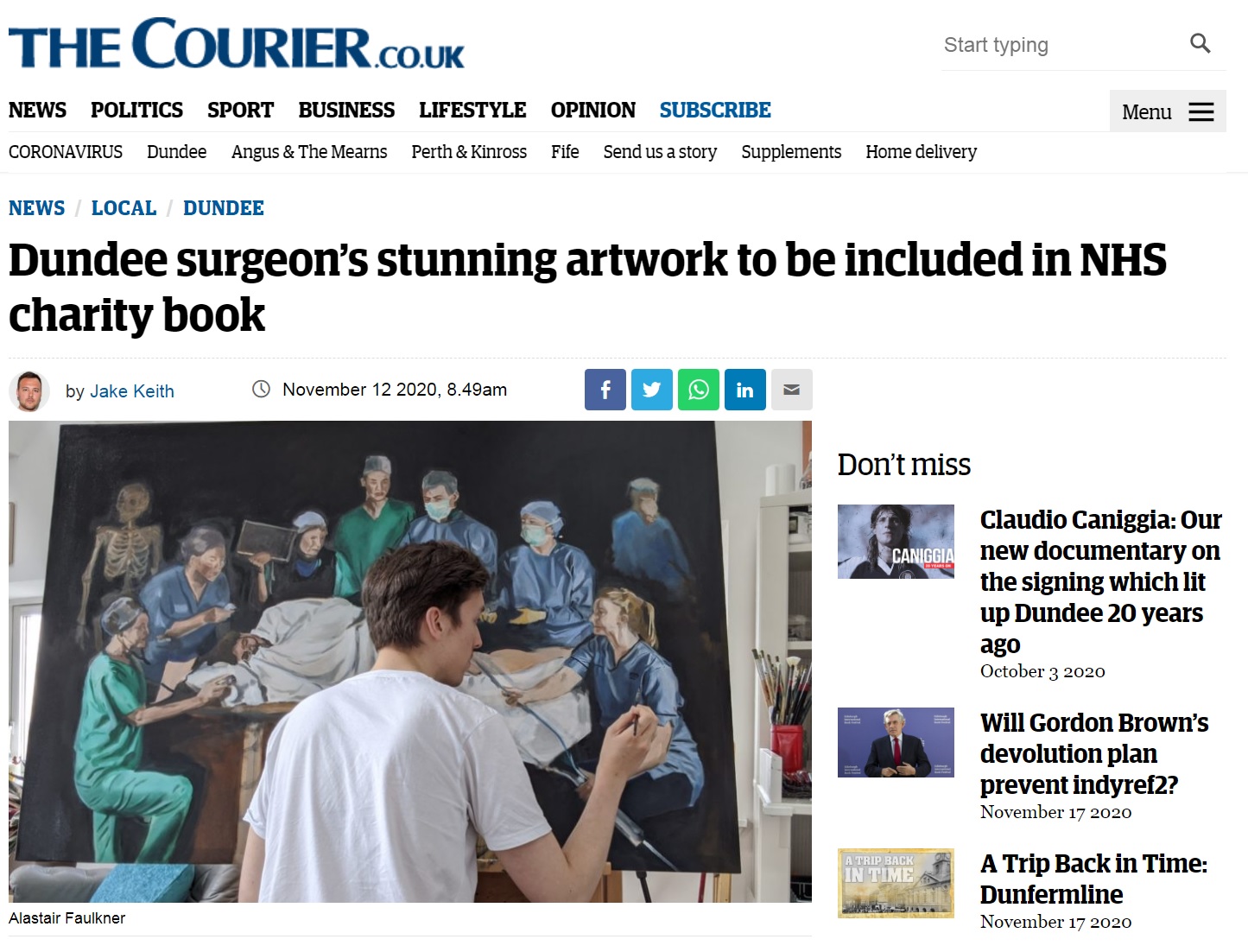 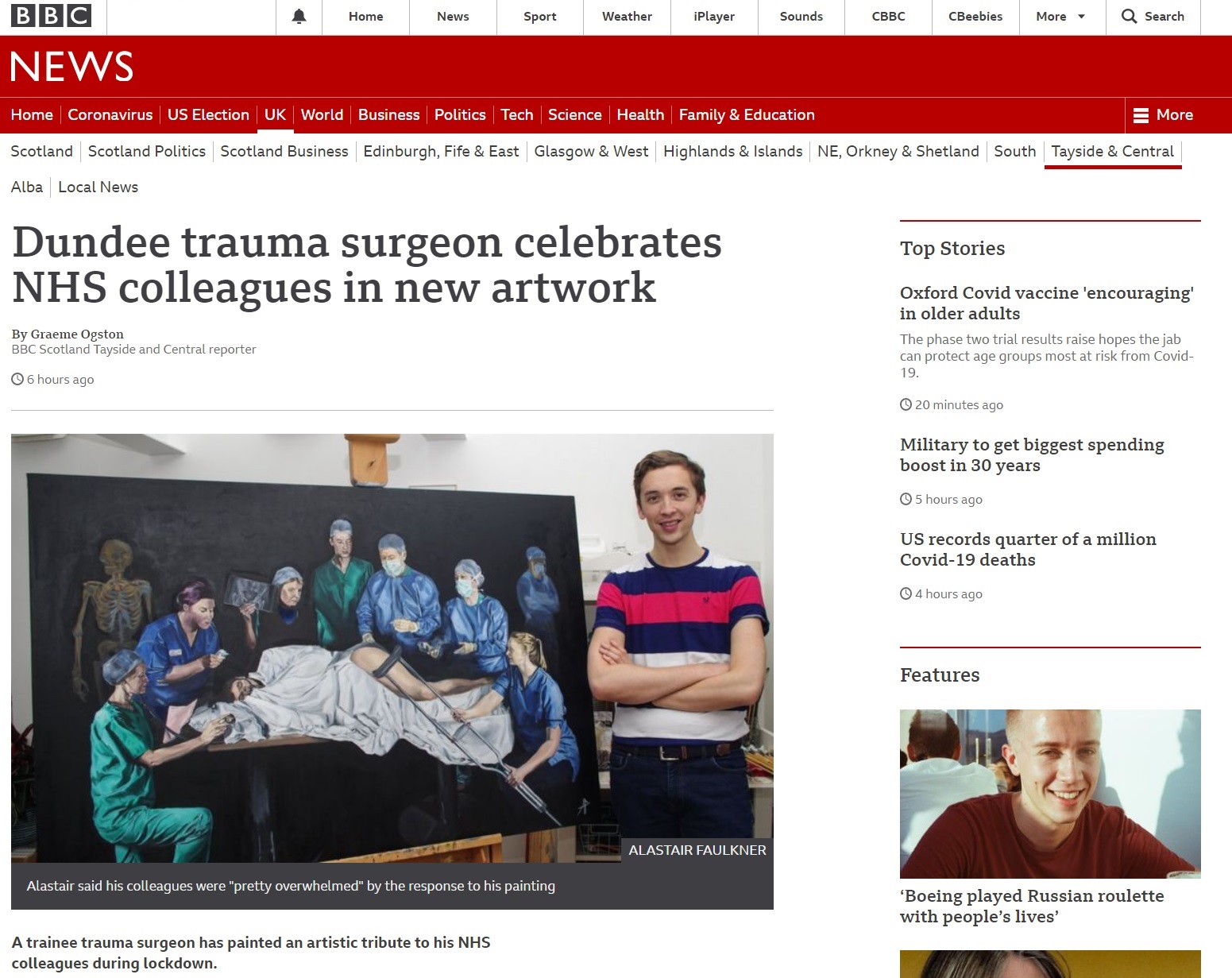 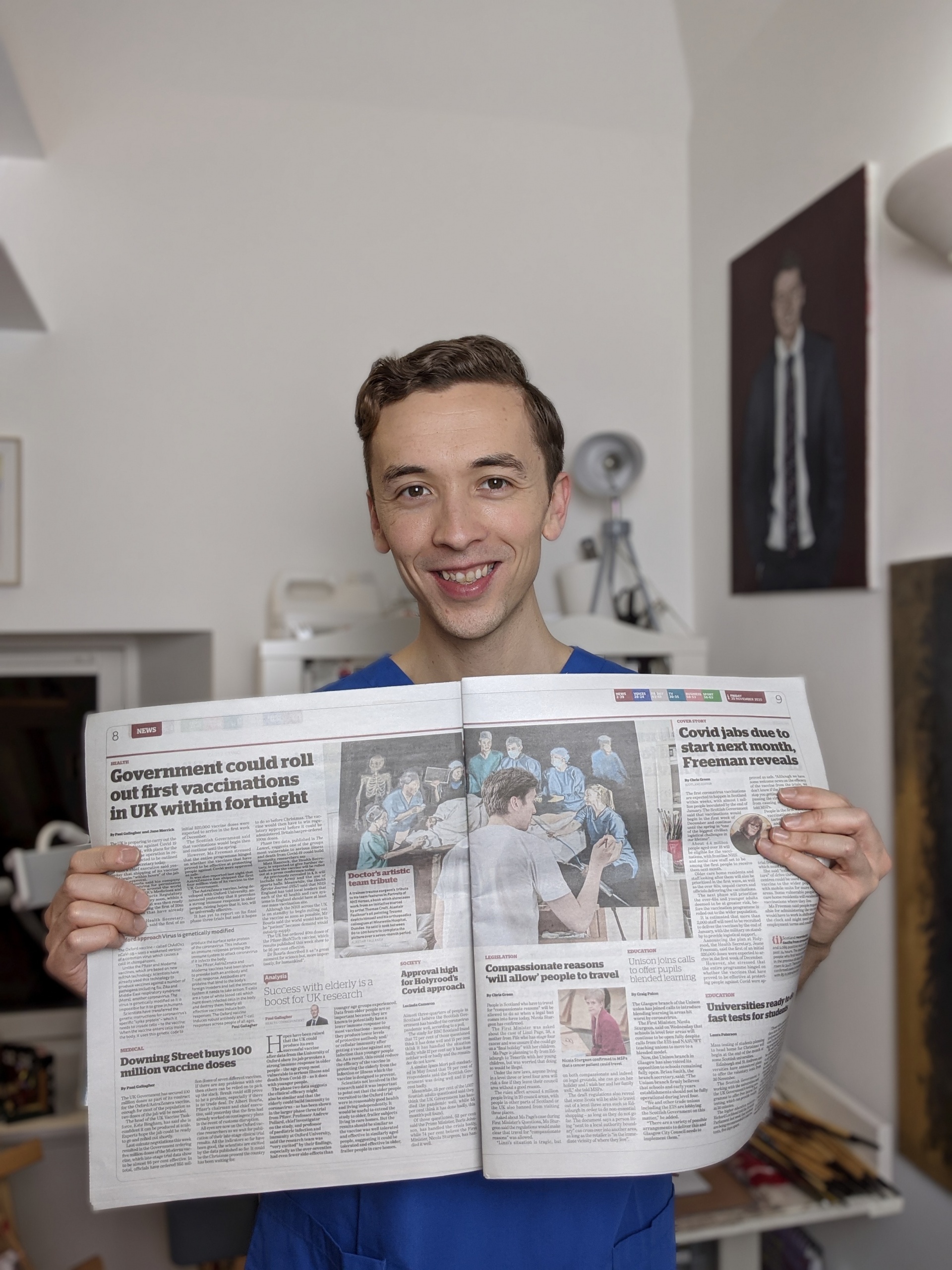 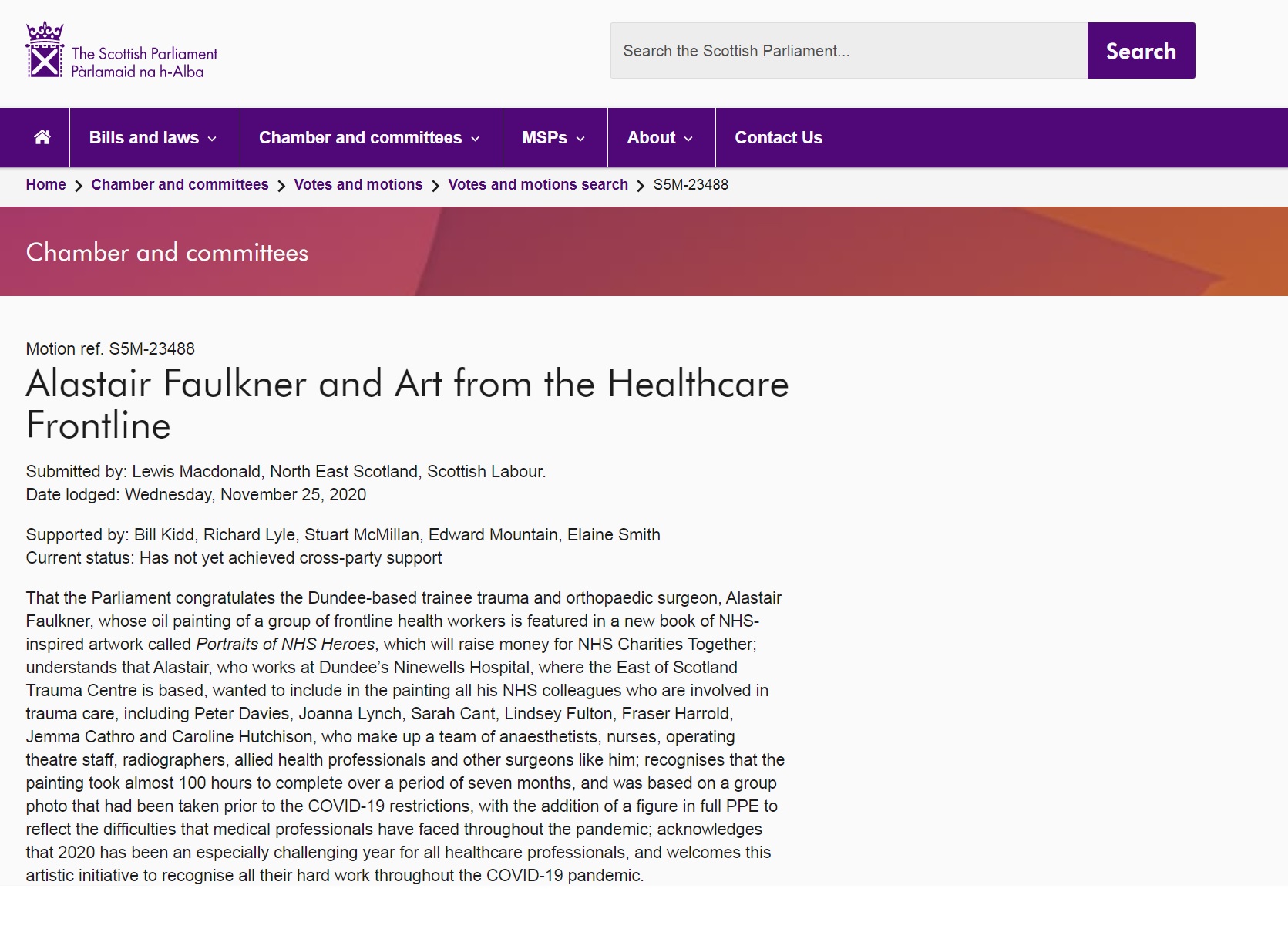 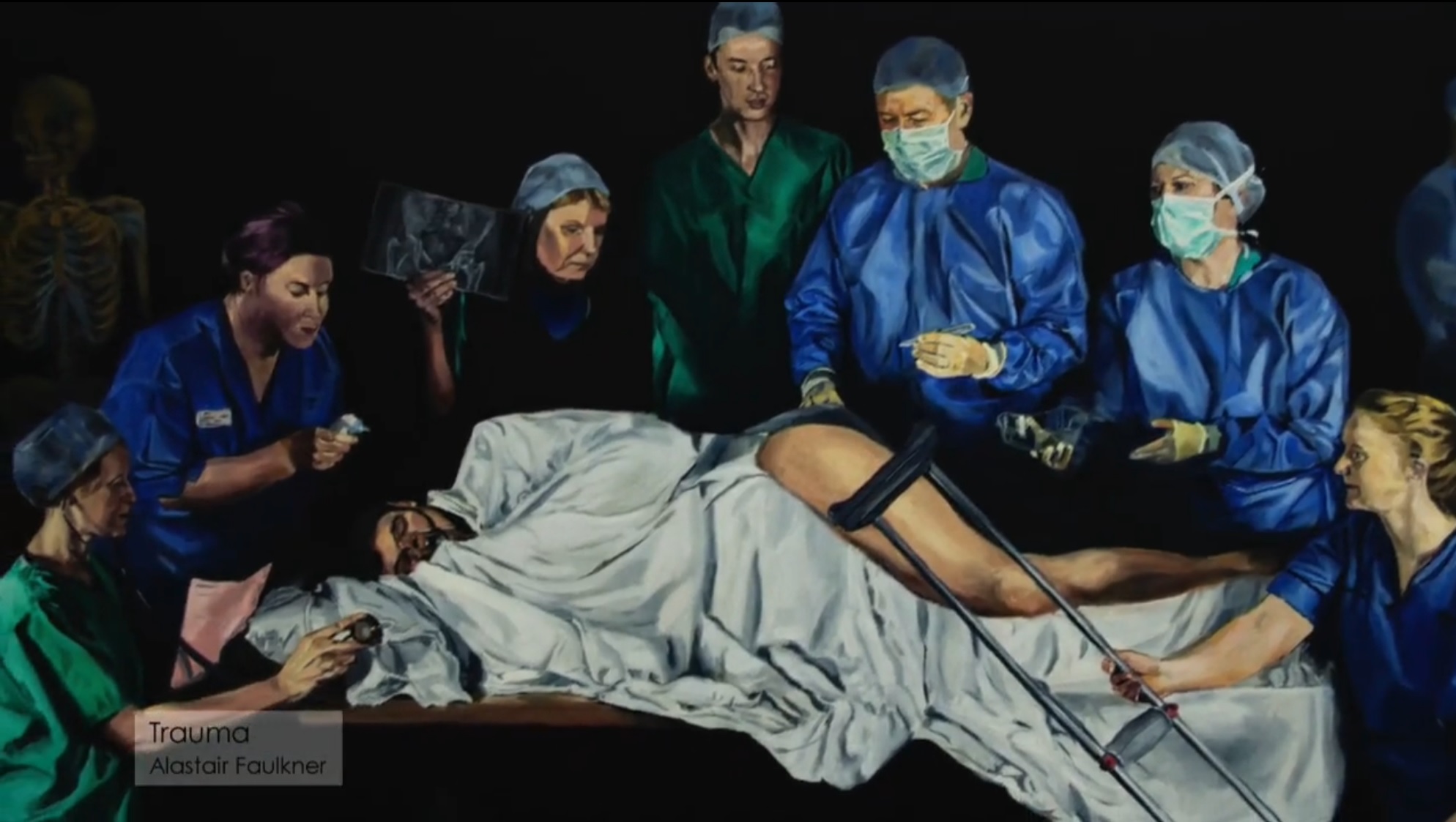 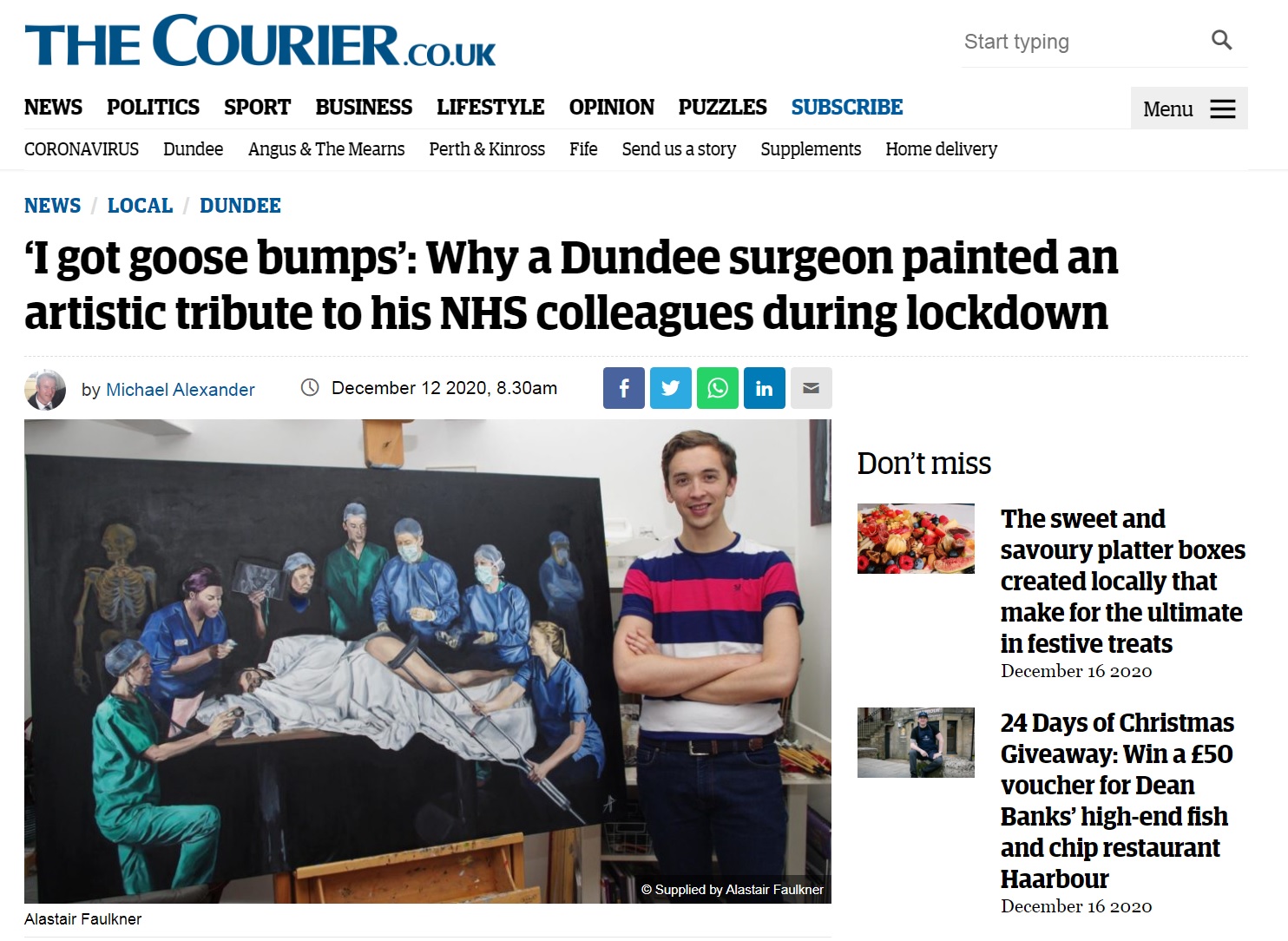