On Sunday 21st February 2021, I had the enormous privilege of opening the third season of Sky Arts Portrait Artist of the week painting the wonderful actress, Nicola Coughlan! Known for her roles in Derry Girls and Bridgerton, she was an absolute dream of a sitter and here I share my experience.

Two weeks ago, Dundee experienced some of the worst snowfall in recent memory and my car was buried under several inches of snow. An early decision was made to walk to work and I went about my day as normal, assisting in the fracture clinic and seeing patients. I glanced at my phone and noticed there was an email from one of the producers for Sky Arts Portrait Artist of the week. As I trudged home through the snow I had a lovely conversation with one of the series producers who invited me to be the first featured artist on Sky Arts Portrait Artist of the week season 3!

For anyone who has read my previous posts, I couldn’t quite believe it. As an avid follower of the first two seasons during lockdown I had grown to love the programme as a personal highlight of the week. The format brings together an artist from a previous series who paints live, in front of a global online audience, a celebrity sitter with interspersing questions from host Joan Bakewell, and judges Kate Bryan, Kathleen Soriano and Tai Shan Shierenberg. I had watched most episodes and loved the mix of art chat, general gossip and banter between sitter and celebrity and it often felt like a warm comfort blanket throughout these dark COVID times. 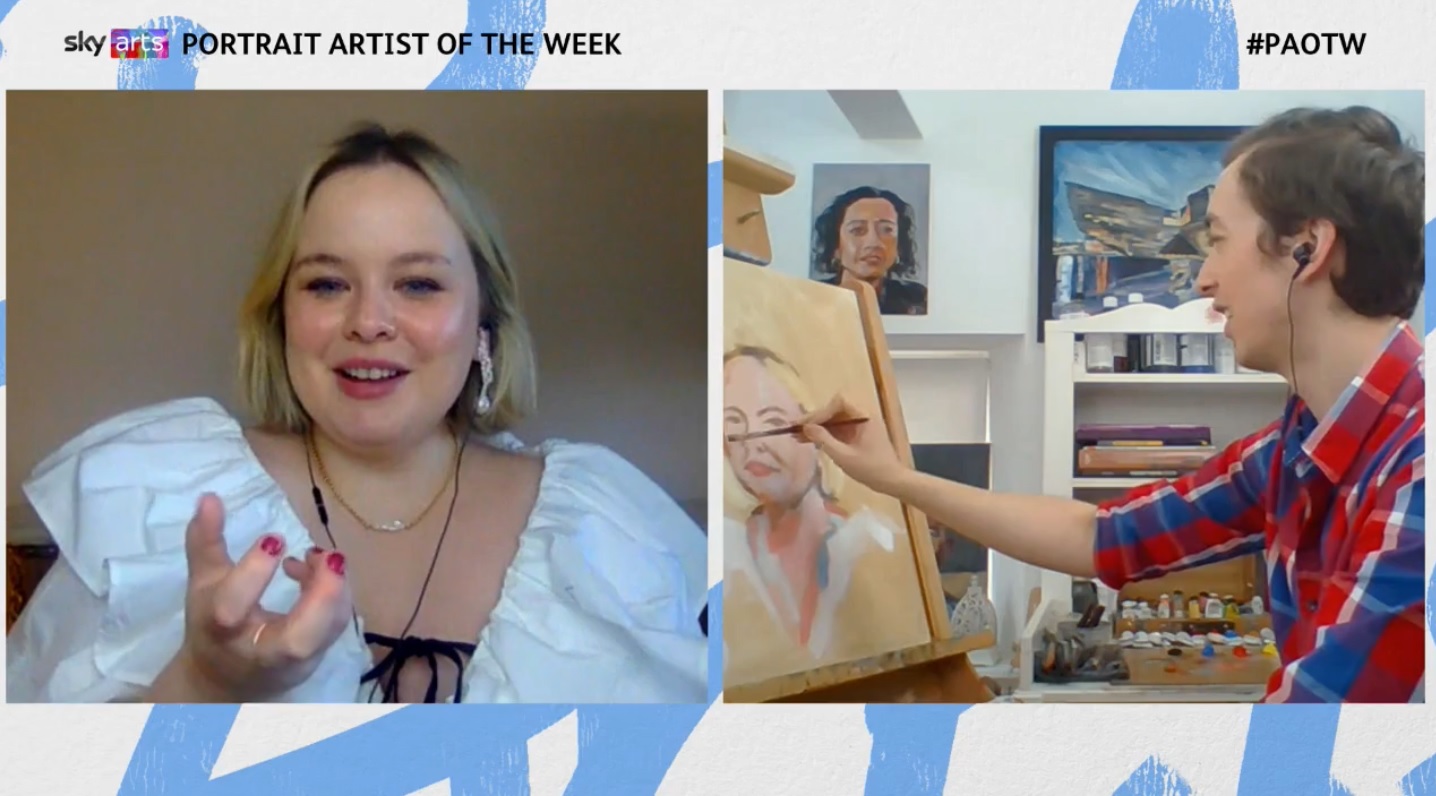 I also learnt a lot about portrait painting during these sessions. Each week felt like a new weekly portrait masterclass where I would pick up tips from Tai and push myself to try new media and colour palettes. As the first series progressed I switched from oil paints to acrylic paints, and from a palette featuring maybe 10 base colours to one featuring 5 or sometimes 6. I learnt with acrylics to be more spontaneous and a completely new artistic style emerged.

Previous episodes featured a previous winner Christabel Blackburn and Tom Croft who organised Portraits for NHS Heroes and two artists whom I had the honour of competing with in Portrait Artist of the Year in 2018.

When I was asked if I wanted to be the featured artist, I said a resounding yes!

Once I had processed that situation and the reality of painting live to a global audience hit me I then learnt who my sitter was: the actress and comedienne Nicola Coughlan. I am a huge fan of both Derry Girls and Bridgerton and the anticipation and pressure continued to build. The reality of my daily NHS work kept me going and prevented me from thinking about it too much.

“When I was asked if I wanted to be the featured artist, I said a resounding yes!” 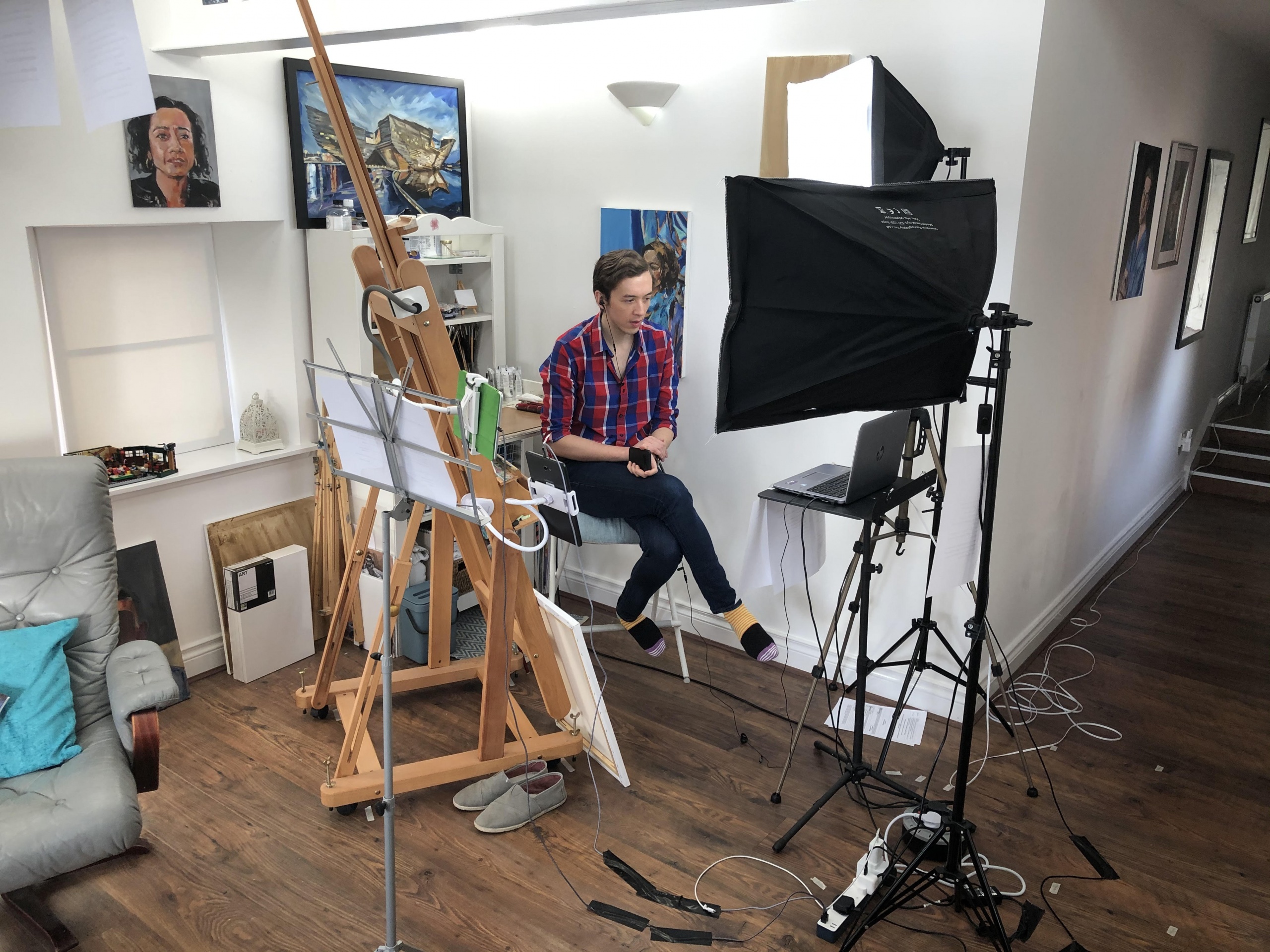 My home studio set up for the broadcast (and yes I paint in socks!)

Preparing for the live broadcast

After a series of emails from the team at Storyvault I participated in a technical rehearsal which involved setting up all my phones, tablets, laptops and apps and checking my internet speed to make sure that everything was working correctly. It was at this point that I met Nicola for the first time and I had a good feeling about the whole situation. She was warm and friendly and instantly put me at ease. I was looking forward to Sunday!

With minimal time to prepare, Storyvault had organised an interview on an evening Scottish show called “The Nine” on the Thursday evening which was fun as well as a radio interview with BBC Radio Scotland on the Monday following the shoot. Now I had to practice painting whilst talking.

I very rarely paint whilst talking. Painting is in essence a silent endeavour usually done in isolation often with no one watching. The fact that I wouldn’t be silent and that thousands would be watching was daunting – I had never painted whilst talked before and for good reason. I had done one preparatory painting on the Thursday evening to understand the landscape of Nicola’s face and on Saturday I was thankful to have my partner Craig available to help me with our dress rehearsal.

On the Saturday afternoon we had set up a zoom in my flat with Craig in the other room. Using the rehearsal script that Storyvault sent me to understand the timings of the broadcast we proceeded to do a full dress rehearsal with Craig playing Joan, Nicola and all the judges. It was a slightly surreal experience, unintentionally hilarious in some instances and Craig, as a trained actor, was highly convincing in all roles. Here I practiced asking questions whilst painting, answering questions whilst painting, painting whilst listening which all required simultaneous cognitive processes.

I soon discovered that I could paint simple shapes and interact fairly easily. More nuanced tonal values required much more thought and I found it immensely challenging to paint and talk at the same time. If asked a question that required a considered response, I would physically need to stop painting in order to do it. Listening and registering information whilst painting was a lot easier. This was a helpful exercise because it allowed me to understand the various points during the painting process where I could interact to a greater or lesser extent. 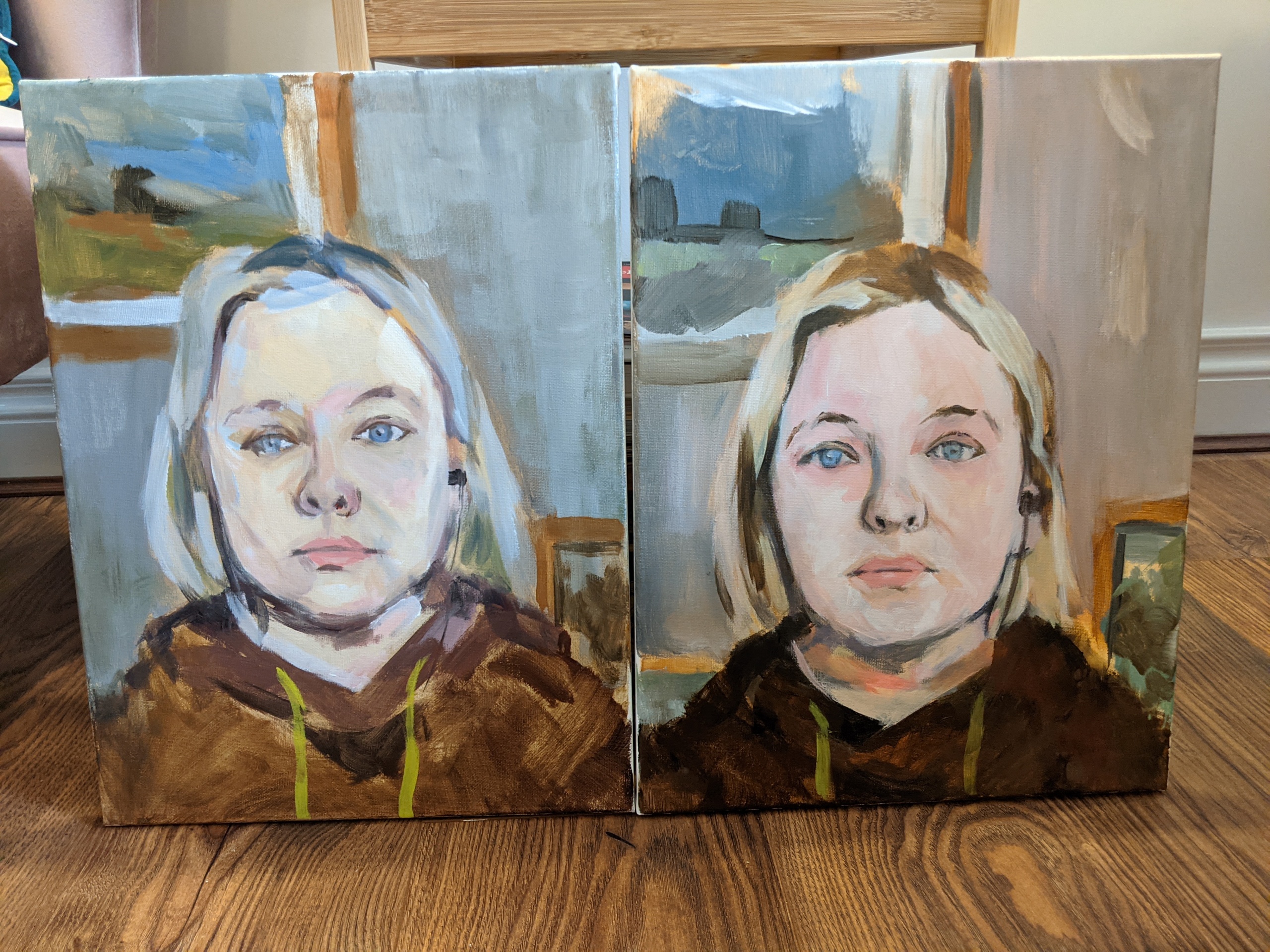 The day of filming

So Sunday arrived and after minimal sleep the night before I was in full organisation mode. There was a checklist of various tasks that needed to be accomplished. All the technology needed checked once and then again and I was to meet with the crew 90 minutes before the broadcast in order to triple check everything worked. I ironed my clothes, showered did my own hair and make-up with Craig as my runner helping me with cables, water, other technology, setting up simultaneous family zooms and managing communications with the production team as my phone was to be used to film the time lapse.

I met Nicola again just prior to the filming began and she was wearing the best outfit and jewellery for a portrait. I informed her that I loved painting clothing and faces and I could not wait to get started. I was able to get some still images prior to starting to minimise the stress of acquiring them during the broadcast and I was ready to go. Ten o’clock approached and then the broadcast began!

It was at that moment it hit me that this was happening. 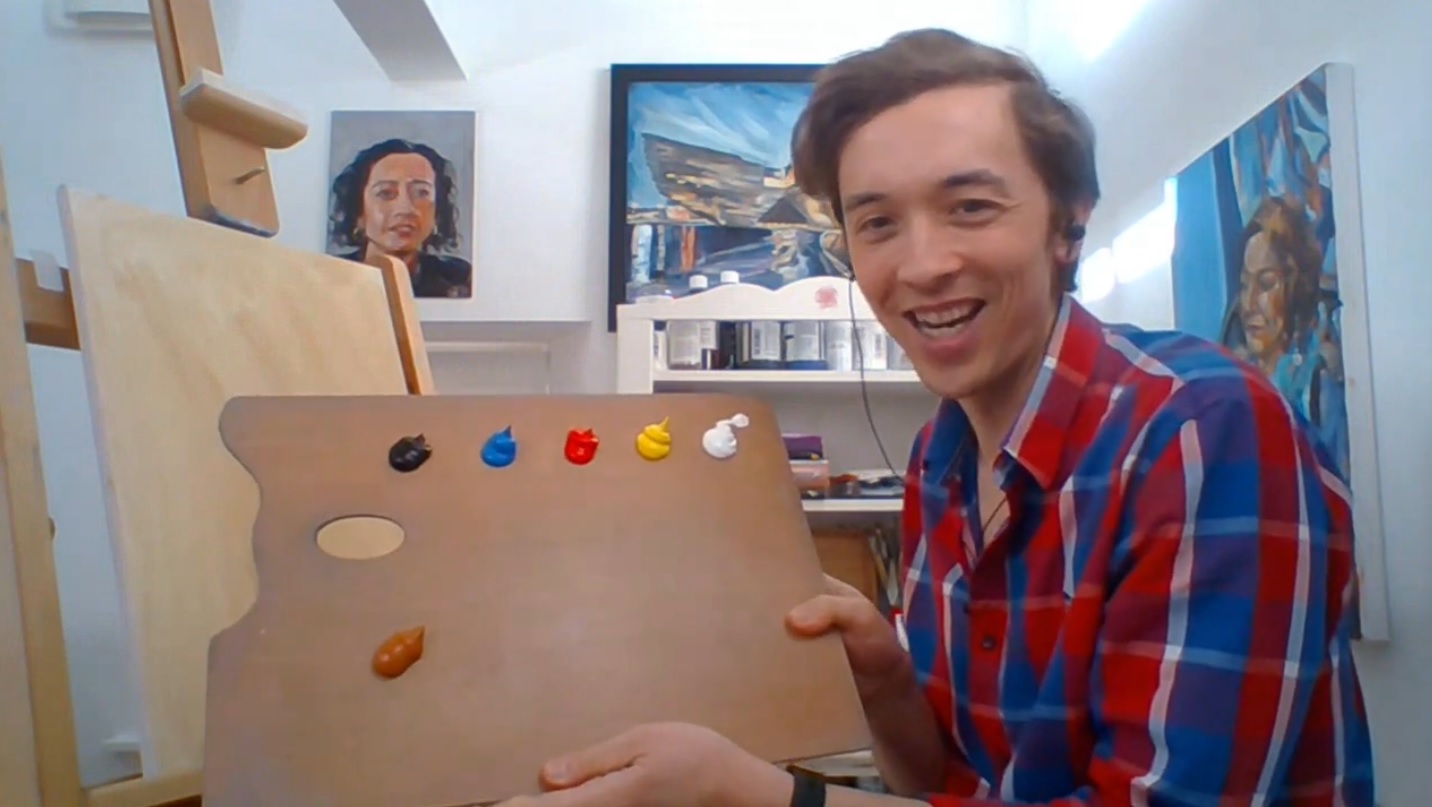 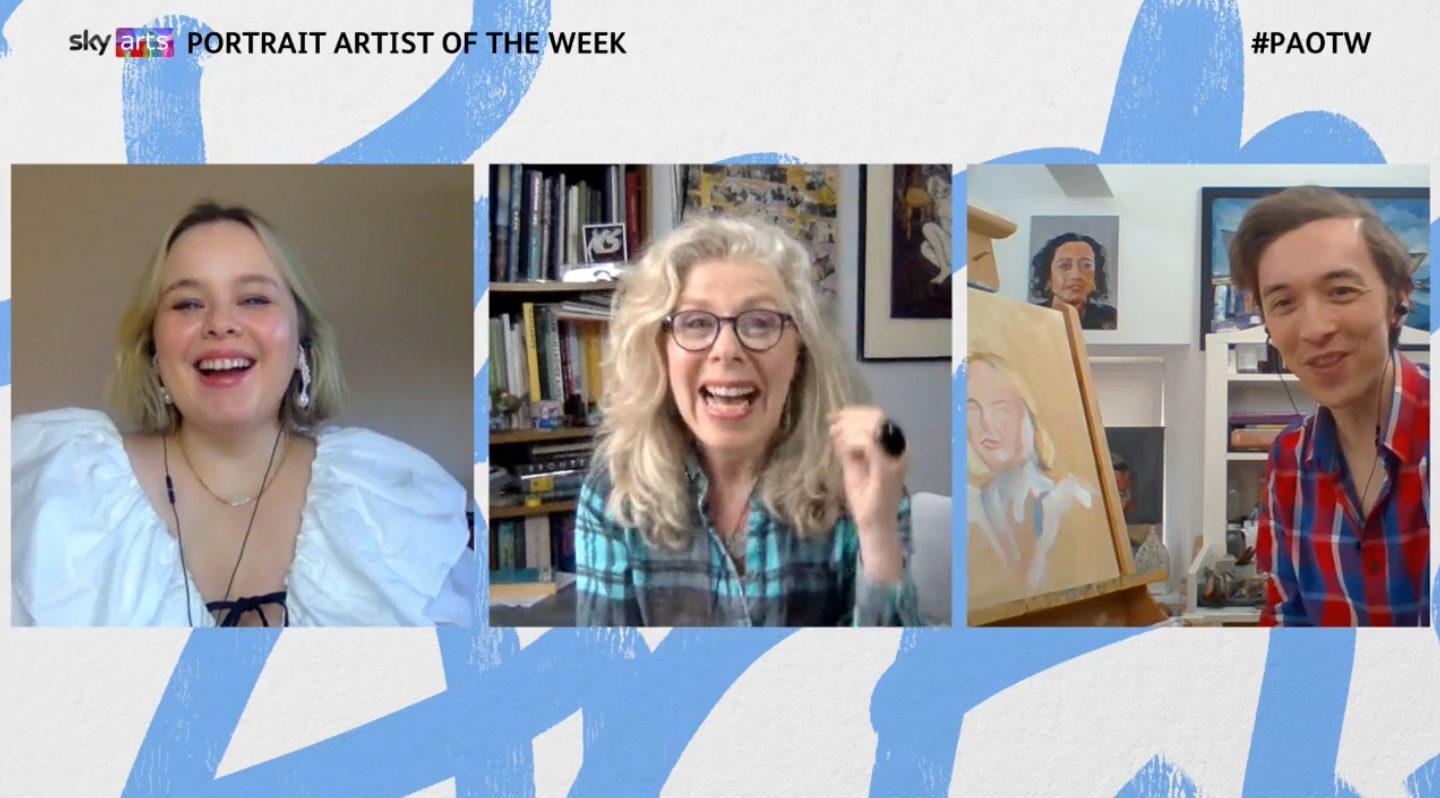 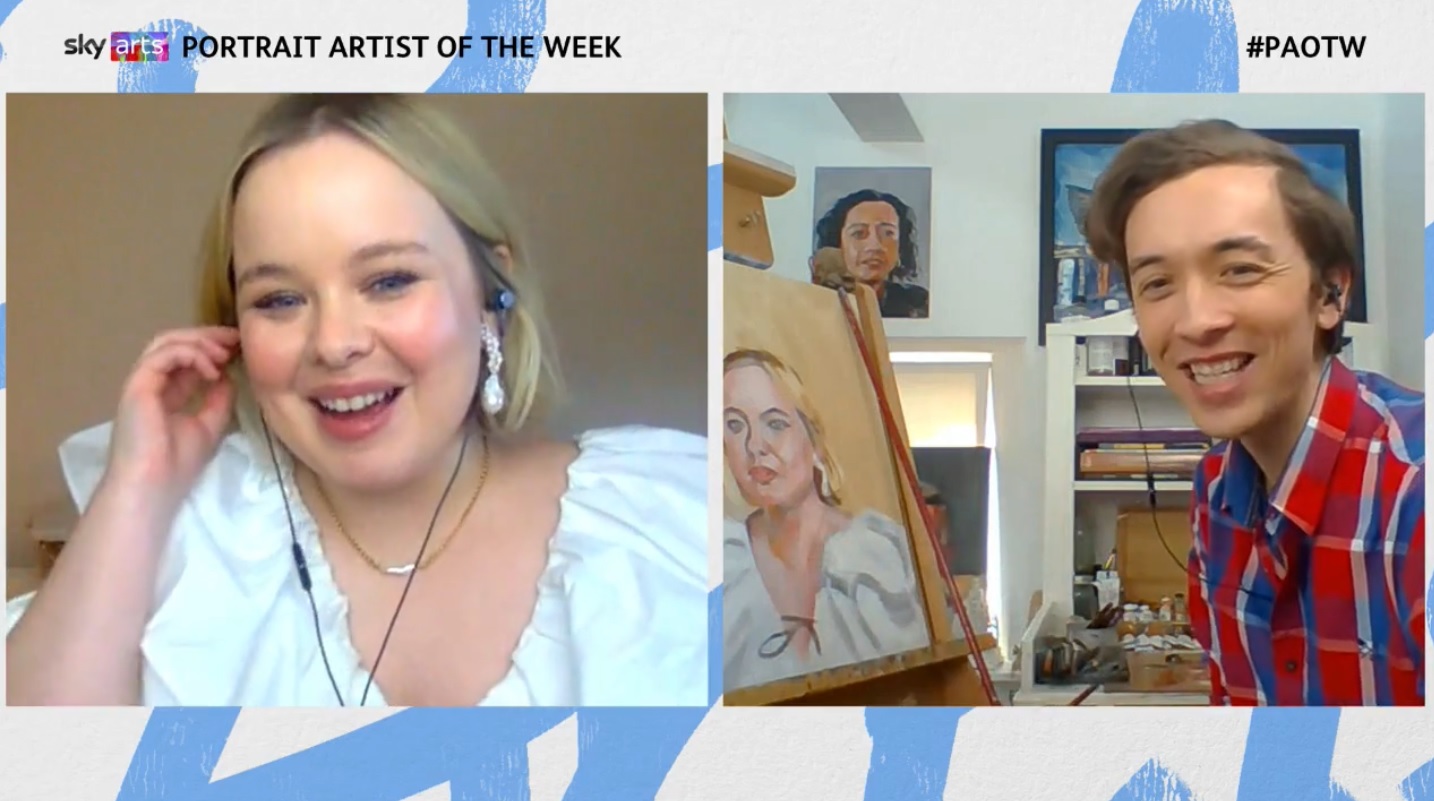 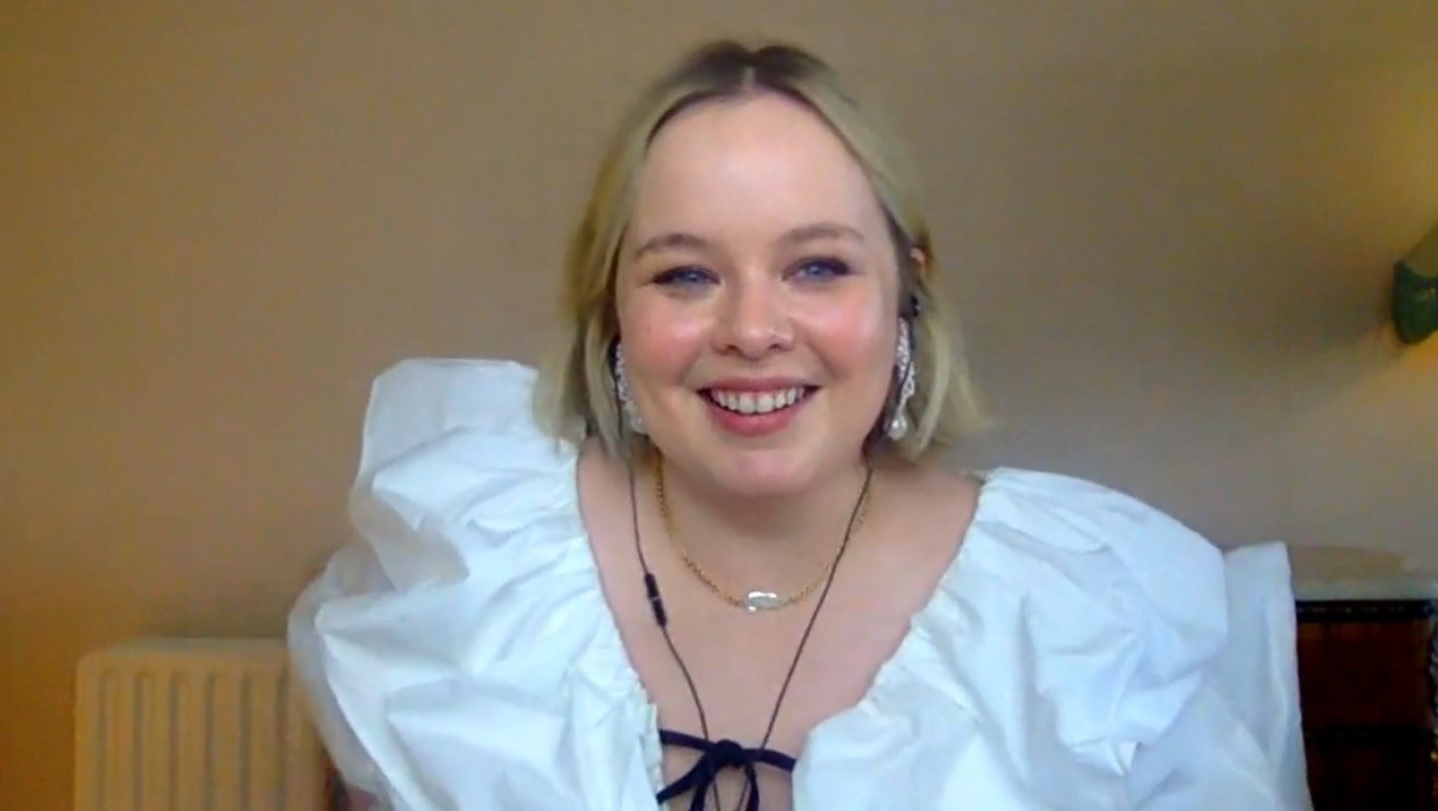 I couldn’t believe after watching this series that I would be the one painting live and speaking to Nicola. It didn’t feel real. I had watched the VT of my appearance in the series three years ago and my painting Trauma and a flood of memories of the last 11 months came rushing back. Those memories defined my lockdown. Portraiture and “Trauma” would be the art I produced during this time. I felt it call culminated into this moment and here and now I had the opportunity to share my art with the world. I felt a rush of excitement and I had goosebumps!

Once my VT was over and I started chatting to Nicola I felt instantly relaxed as soon as I started painting. I had decided early on that I wouldn’t stress about trying to finish a portrait in the allotted time, but instead enjoy the experience, converse with an interesting person and see what the final result was. My aim was to create a strong foundation in which to build the portrait so I could work on it afterwards.

I was pleased to have an opportunity to discuss with Nicola a huge plethora and variety of topics including her career, my career as a surgeon and artist, Trauma, upbringing, Derry Girls, Bridgerton, my favourite operation, Rupaul’s drag race, reality TV and Below Deck, her activism, LGBTQ+ rights and many more. I was also delighted to have the opportunity to discuss with Kathleen, Tai and Kate about portrait painting, Trauma and how it came about, my approach to art and the materials I had chosen today.

Four hours went by in a flash and I was sad it couldn’t continue! That was a testament to the brilliant chat that Nicola provided and the slick and professional manner in which the crew managed to pull this altogether. 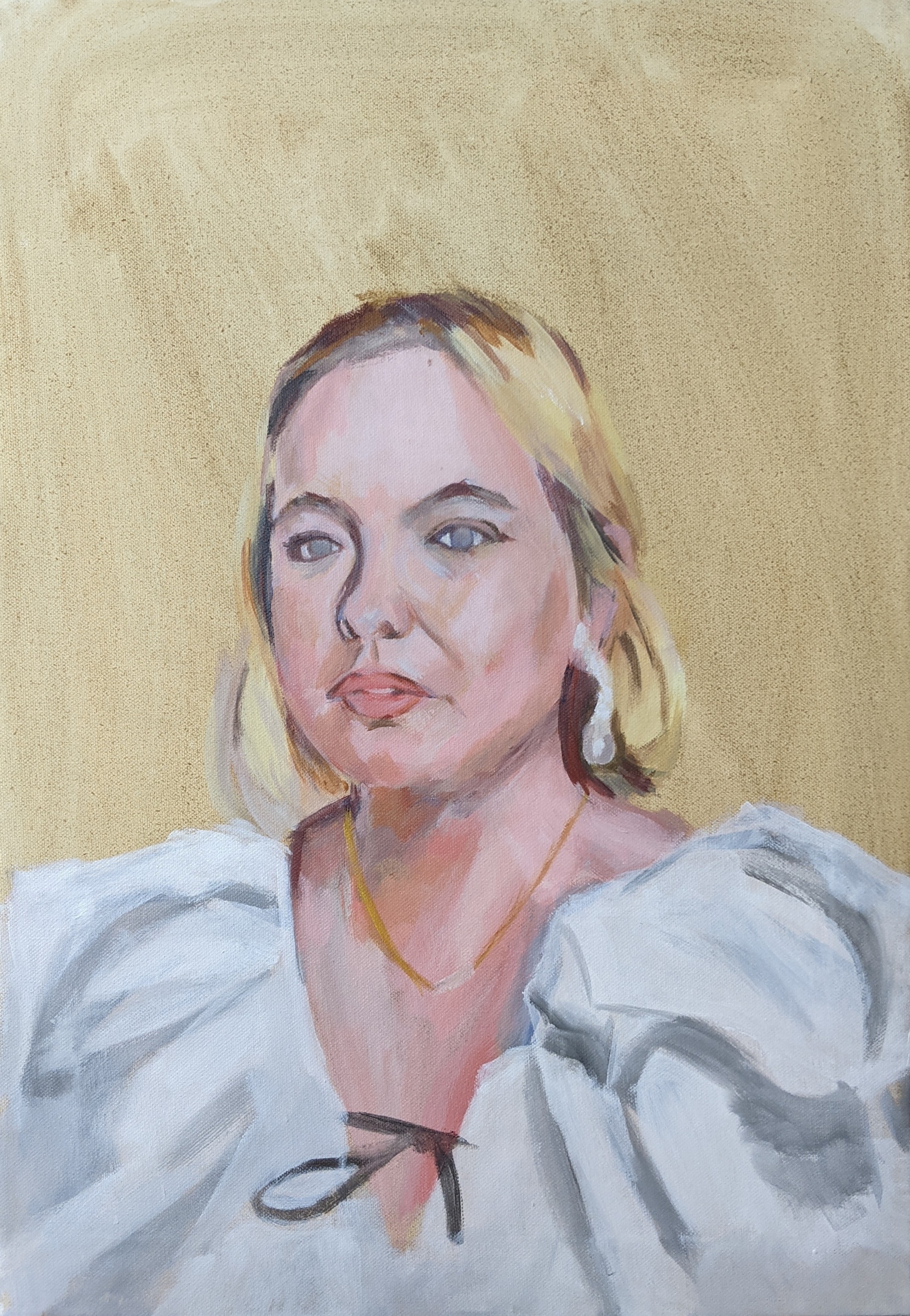 Portrait of Nicola Coughlan after 4 hours

After a fairly civilised on-call, clinic and theatre list I managed to find the time to finish the portrait. Having learnt that pink was Nicola’s favourite colour I was determined to put it in the portrait somewhere. After painting the background about five times I settled on a dark blue in order to bring out the wonderful tones within Nicola’s face and her eyes and I signed the painting in pink.

Overall this was an unforgettable experience. The last year artistically for me has been defined by this programme, portraits and my painting Trauma. Like many others during the pandemic I found comfort in this programme and saw it as an opportunity to connect with a global art community and feel less alone. To have the opportunity to be a guest artist on it was an honour made doubly so by my amazing sitter. I will continue to tune into this series and really looking forward to the future artists and sitters who will be featured!

My interview with Janice Forsyth on The Afternoon Show 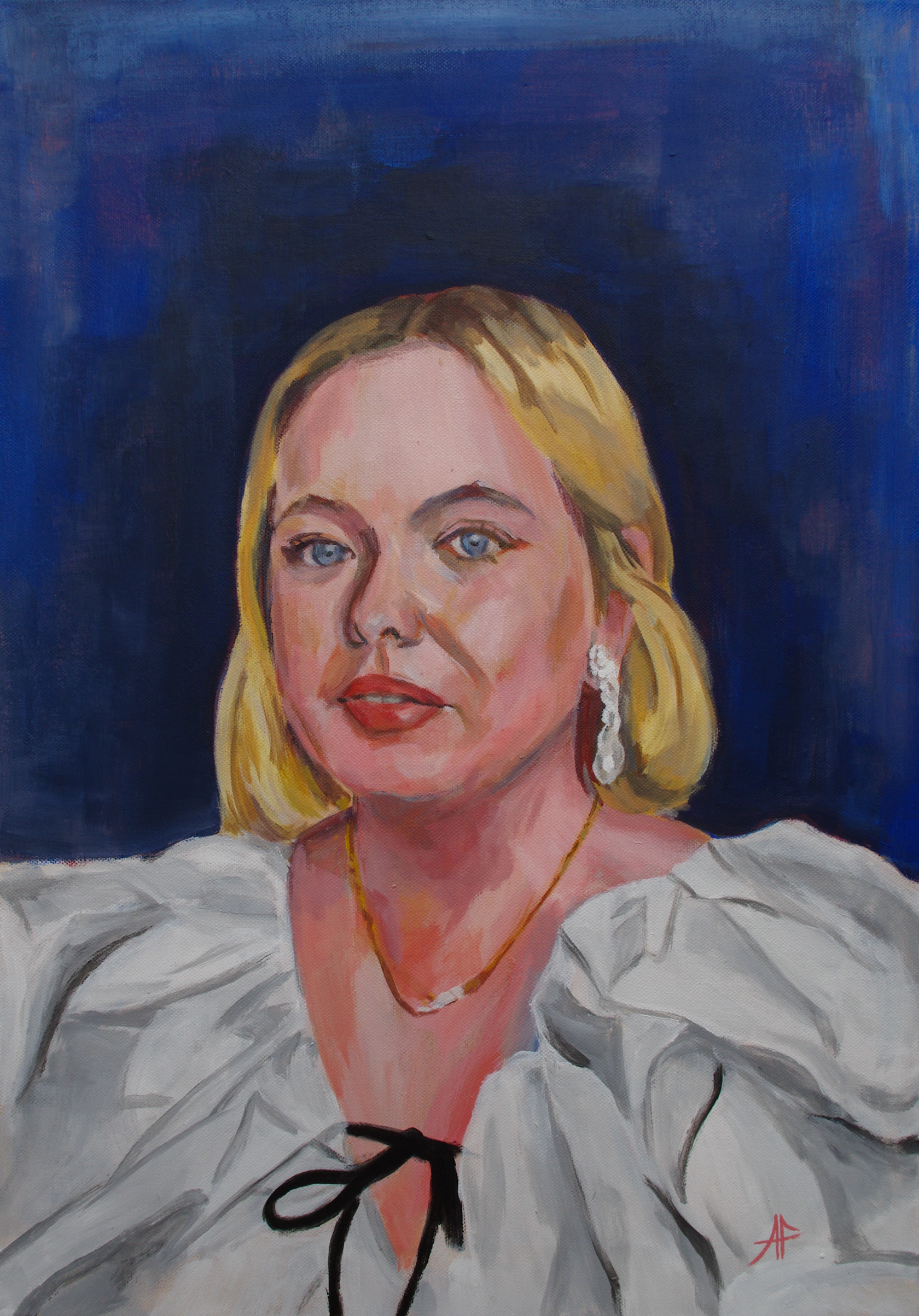